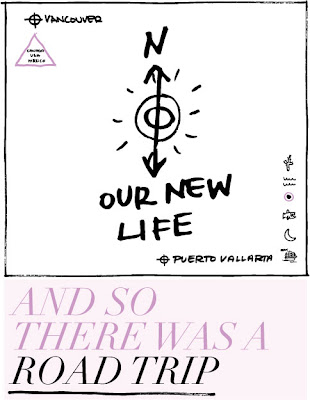 V and I had decided that the easiest way to get all of our stuff, as well as ourselves, to Mexico was to load up our car and make the long drive down. For some reason I had always placed any city in Mexico directly under Los Angeles and so I had been mentally preparing myself for a four-day excursion lengthened only slightly by staying with friends that lived in cities along the way. That bubble was burst when V worked out our travel schedule. The length of time he wagered it would take us made me leap to a map only to discover that Puerto Vallarta is halfway into Mexico – roughly the same distance from Vancouver as Toronto. Huh? All of my visions of casually driving up to LA to visit friends and intermittently brush shoulders with the rich and trendy were dashed. I tried to console myself with the idea that the more remote the location the bigger the adventure that awaited and as I got into the car on a bright, cold Vancouver morning I almost believed it.

There is something very reassuring about traveling great distances over long periods of time. You are able to watch the land change, moving from the familiar to the foreign, not in a period of hours as with air travel, but in days. It took us two days to move through Washington and Oregon; countryside that looks identical to that of the Lower Mainland and this gave me just enough time to make peace with what I was leaving behind. The northwest coast is exceptionally beautiful; it’s rainy climate allowing shocking displays of greens and blues. In this part of the world most of your closet is filled with wool and gortex and you deeply appreciate the pleasures enjoyed on a truly hot and sunny day. While I was excited to live in a place that only required me to wear shorts and sundresses I knew I would eventually miss this landscape and made a point to take it in as we slowly headed south.

After awhile there are only so many green fields you can drive through before becoming mind numbingly bored. This is when V and I decided to turn from the countryside sliding beside us and chose instead to turn on each other. I am not exactly sure how large the interior of a Volkswagen Jetta is, but after a few 8-hour days on the road it feels like it’s the approximate size of a matchbox. Combined with the fact that the car was filled to the brim with all of our worldly possessions, forcing both of our seats to be crushed against the dashboard, and you have a recipe for nothing but trouble. We quickly realized that V’s expectations as to how clean the car should be were vastly different from mine. While I am someone who has never agreed with rotting food, I am able to withstand quite a bit of clutter. V was immerging from this experience as a closet neat freak who sternly enforced a car garbage system and could not stand the sound of me eating anything crunchier than a ripe peach. I, on the other hand, expected quite a bit more conversation than he did – the more soul baring the better – but most of my leading questions were met with blank eyes and a strong willed resistance. My terror filled gasps when V accelerated to any speed above 100km/h, no matter how light the traffic, did nothing to endear me to him. On day three, as I was busy pouting about being reprimanded for not cleaning off the top of a Coke can properly, I began contemplating what seemed the only possible outcome of our road trip – my potential life in prison sentence for first-degree murder.

We spent a few days in LA, with a couple named Sophie and Steve, whom I’d known when they lived in Vancouver and who had remained close friends even after they relocated to Los Angeles. When we arrived after another long day of driving Steve helped us unload our car. The first thing out of his mouth was, ‘Why did you guys decide to drive? Soph and I almost killed each other when we drove from Florida to Vancouver. Road trips are a surefire way to end any relationship.’ I nodded at this sage wisdom, a little concerned that we were only halfway to our final destination. Sophie showed up a few hours later, gave us both huge hugs and turned to me whispering, ‘Are you surviving the road trip? Steve and I wanted each other dead when we drove from Florida to Vancouver.’ This did not bode well.

Thankfully things started to look up for V and I after we left LA four days later. We were entering Mexico and the ‘differentness’ of it brought us together as one foreign unit. I had been terrified of crossing the border in Mexico; in the days before we left Vancouver the news had been full of reports of drug shootings in border towns. V had made sure to take us to an exceptionally small crossing just outside of an Arizona town called Ajo, the Spanish word for garlic. We were now in desert country where the sky stretched farther than I had ever imagined, bearing down relentlessly on the dusty earth below.

We crossed the border extremely easily with none of the media hyped corruption or gang violence and spent the day driving as far into northern Mexico as possible. Northwest Mexico is a place that no tourist need ever visit. It is hot, dry, full of large factories and poor rural towns. I had only spent one brief week in Mexico, in Puerto Vallarta, prior to deciding to move there and I was beginning to wonder if I had made a very big mistake. Had I wanted to change my life so badly that I had convinced myself that Mexico was lush and beautiful? As the hours and days crept slowly by there was no change to the dusty Mexican vista outside my window. Not wanting to alarm V that I may have to book a flight home as soon as we got to Puerto Vallarta I kept all my internal angst on the inside for once, falling into hours of silent despair while he drove us deeper into the bowels of what I only could only imagine as hell on earth. I had left the crisp greens and deep blues of British Columbia to live in a rust coloured sandbox where the only things that flourished were cacti and the El Cartel.

Our last stop before we were to reach Puerto Vallarta was Mazatlan. About two hours out of the city the land began to distinctly change character. Gone were the arid sand dunes with the unending highway stretched in front of us – here the land was more fertile. Farms began to look like they could actually support life and every so often an ocean view would surprise us as we rounded a corner on the toll highway. This was the Mexico I had signed up for and the further south we headed the better it got.

The next day we arrived. The sturdy jungle covered mountains that stood proud above Puerto Vallarta’s large ocean bay reminded me of the tropical version of the city we had left only 10 days earlier. Driving into El Centro, the old town, with it’s crumbling and cramped buildings and quaint cobblestone streets I felt as though we had landed in a small European town. We parked outside V’s mother’s house and stretched our cramped limbs, pushing away thoughts of returning home anytime in the near future. I would take on almost anything, if only to avoid another road trip.