And finally – week 5 of our trip. For those of you that really only tune in to watch the things that I dye I thank you for your patience as my blog and instagram feed became a personal vacation slideshow. This is the last instalment for the foreseeable future – although I will be #tbt-ing the crap out of this trip because it was just so crazy inspirational.

In our last week on the water we finally turned back home. Heading south from Port McNeil we spent several 12 hour power days to make up for time we had spent playing up north. To my relief as we headed down the coast the weather turned from rain to crisp fall sun and we finally managed to get a little bit of actual sailing into the commute. 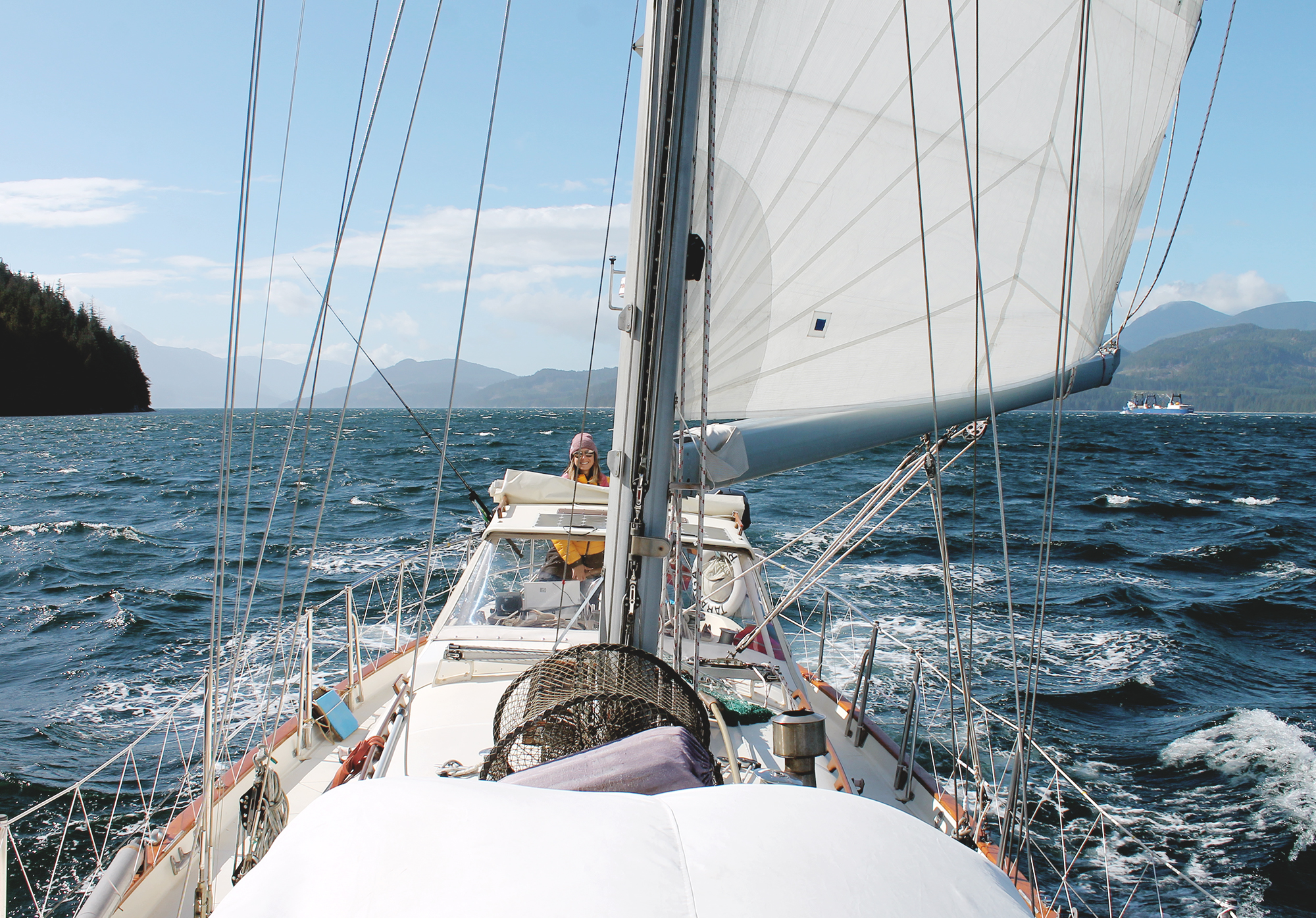 Sailing down the Johnstone Strait as the wind picked up considerably. Because most of the trip was through various archipelagos and coastal inlets there was very little sailing weather which usually occurs in wide open seas. The Queen Charlotte Strait and Johnstone Straight were our two opportunities and on this day the wind did not disappoint. 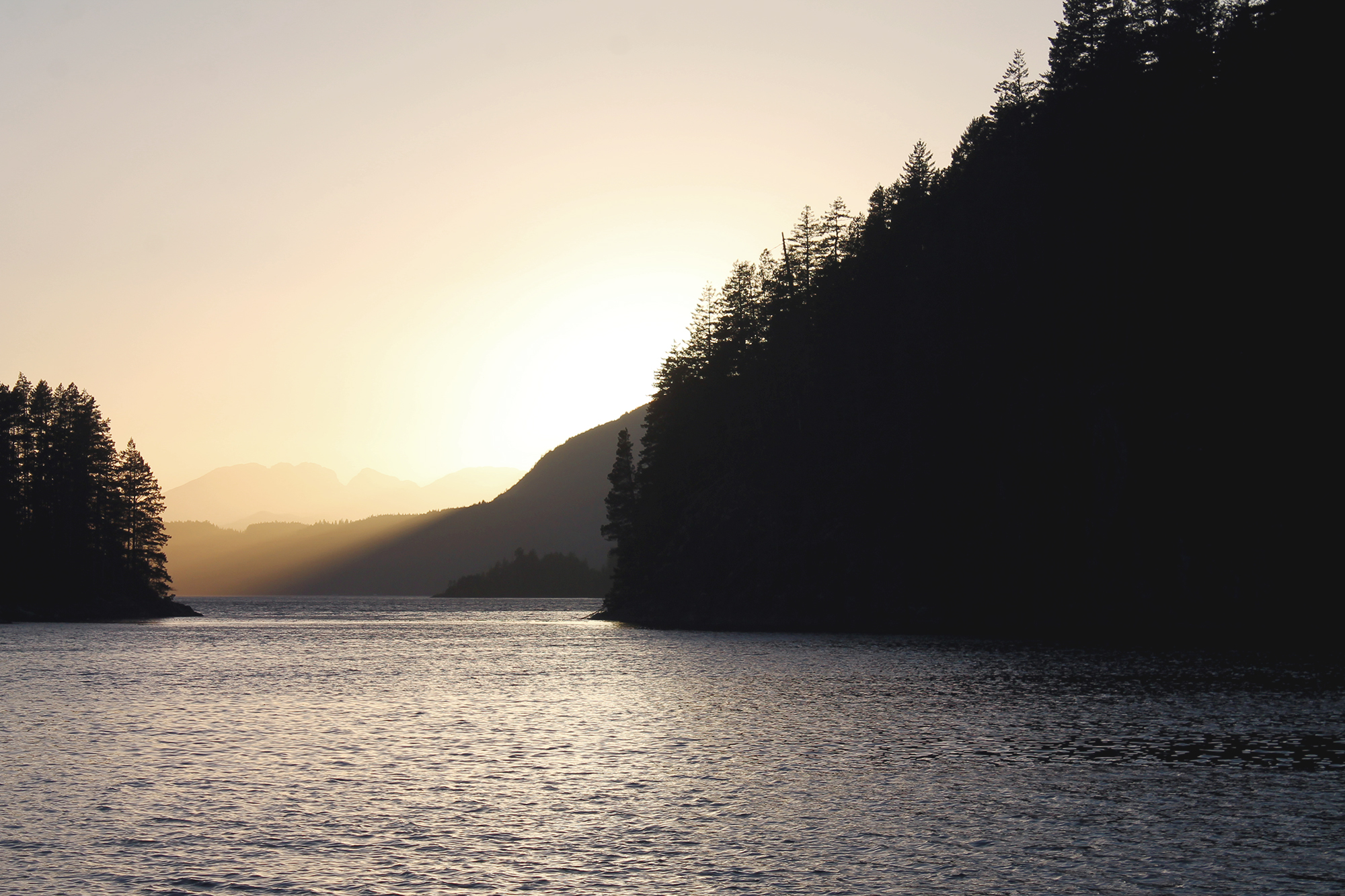 The light as we anchored in Owen Bay – a reportedly haunted spot where there have been many suspicious deaths over the years. As we were entering the bay our electronic navigation inexplicably stopped working and I almost steered us into some pretty serious rocks. I’m not saying I believe in ghosts but… 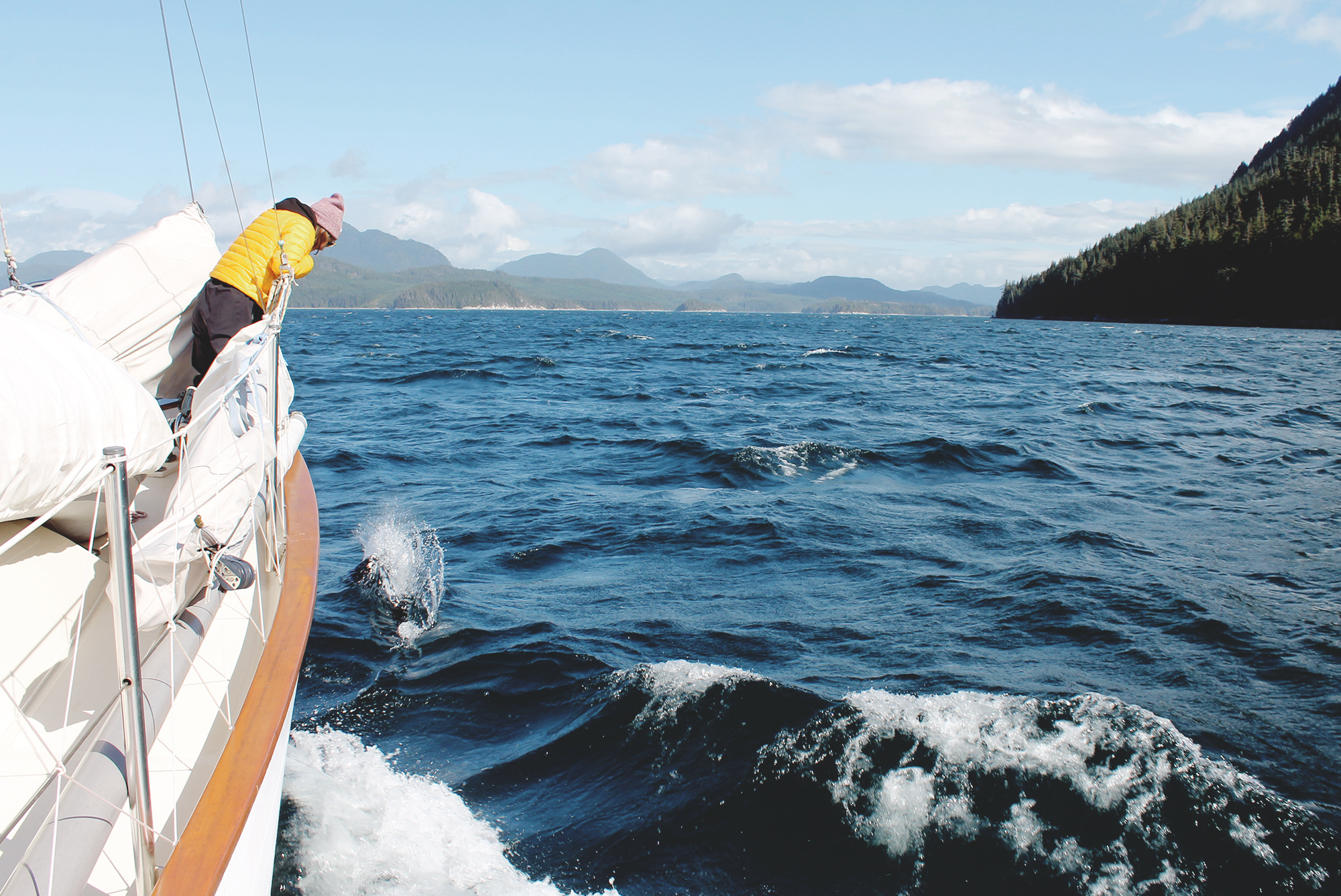 As we headed down Johnstone Strait a pod of pacific white sided dolphins jumped and swam in our wake. I moved to the furthest point of the bow, feet propped up by our anchor, and watched the show. Unfortunately all of our photos seem to be missing said dolphins but I swear up and down there were there… 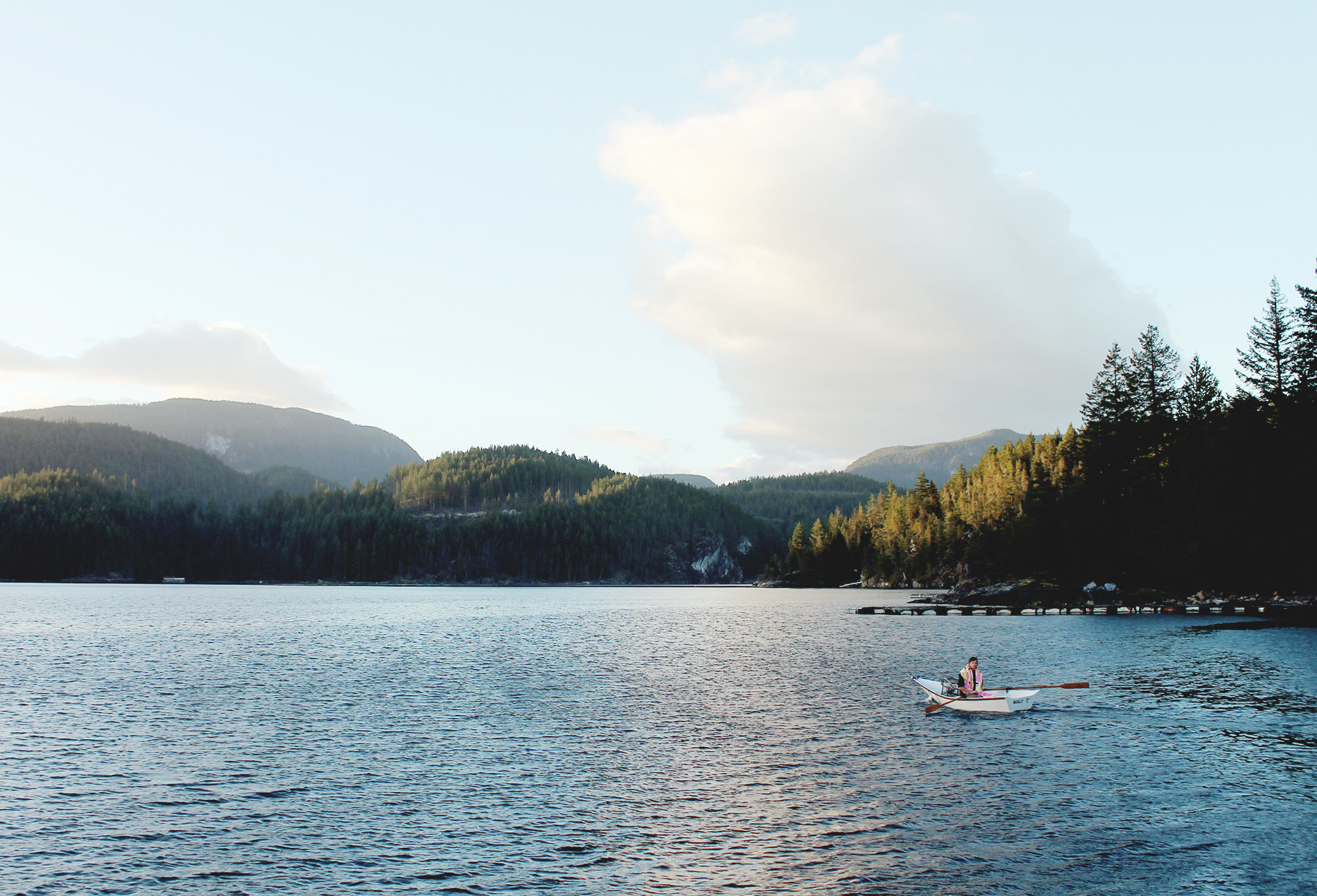 Setting the crab traps in our little row boat, Maui. 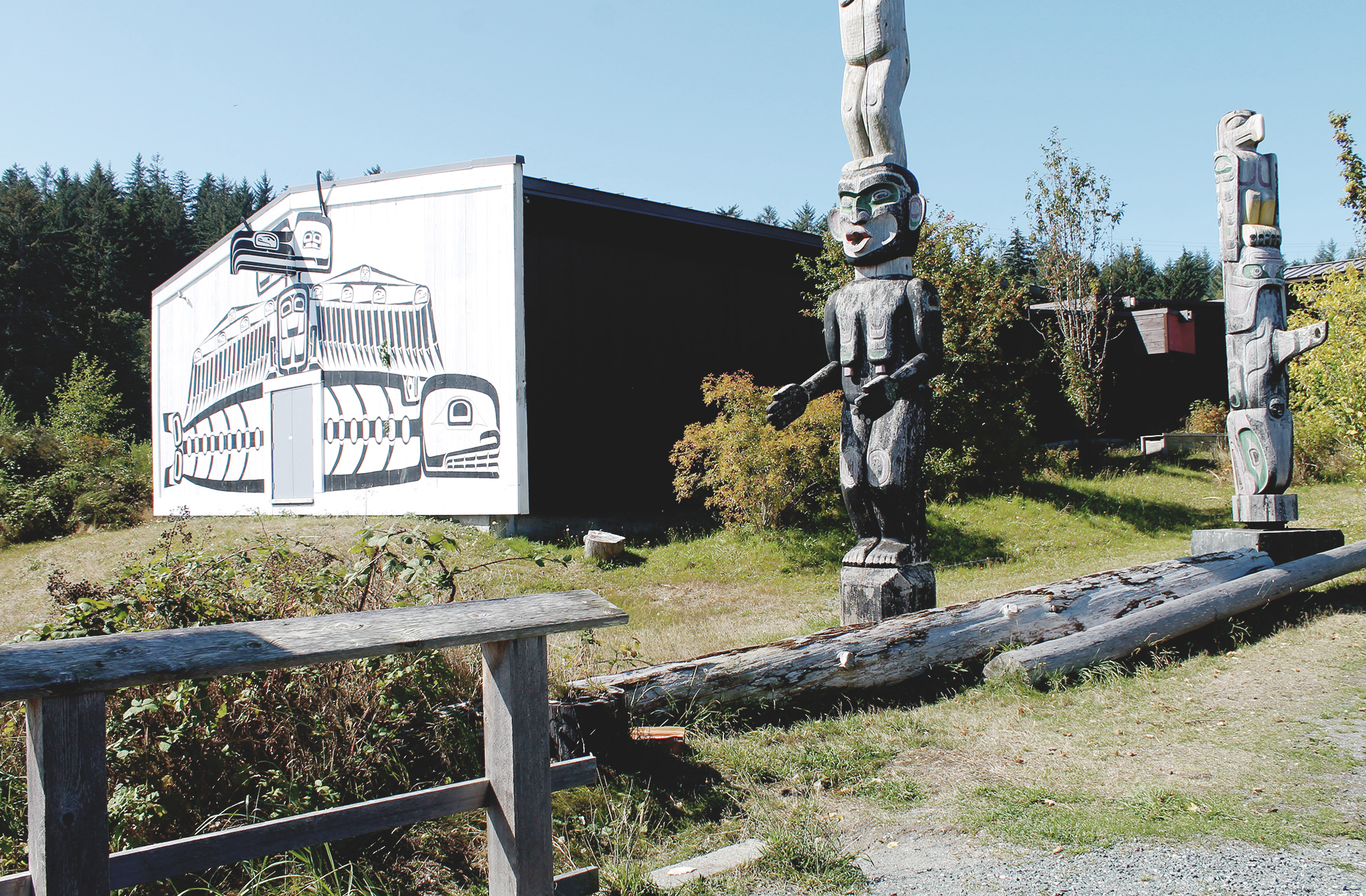 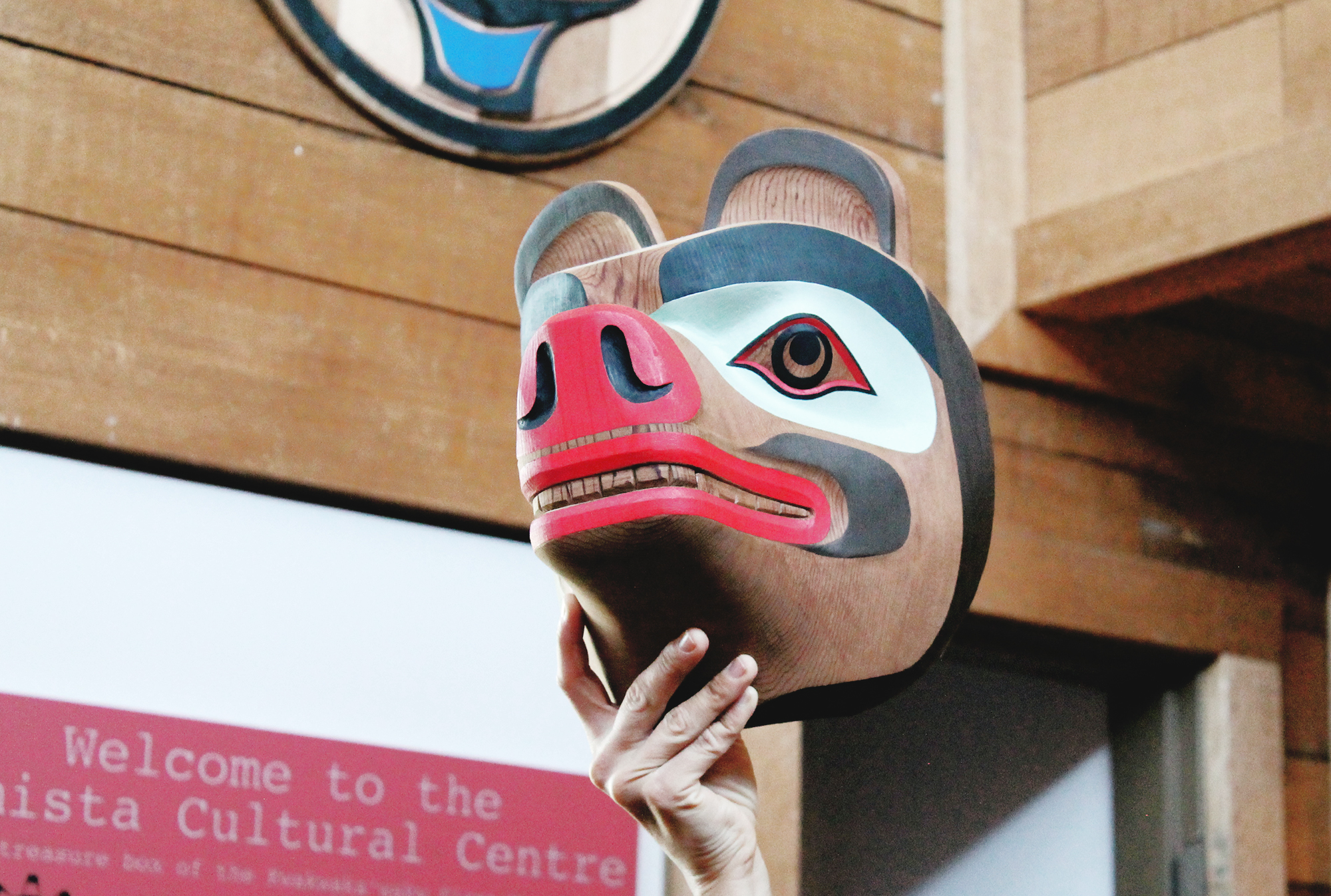 A trip to Alert Bay. The First Nations communities have suffered tremendously over the centuries including being banned by the Canadian government from holding potlatches – a cultural festival that connected the coastal communities – until 1951. The regalia from these celebrations were confiscated but later returned and are now on display by the First Nation run U’mista Cultural Centre – a must visit if you are in the area. 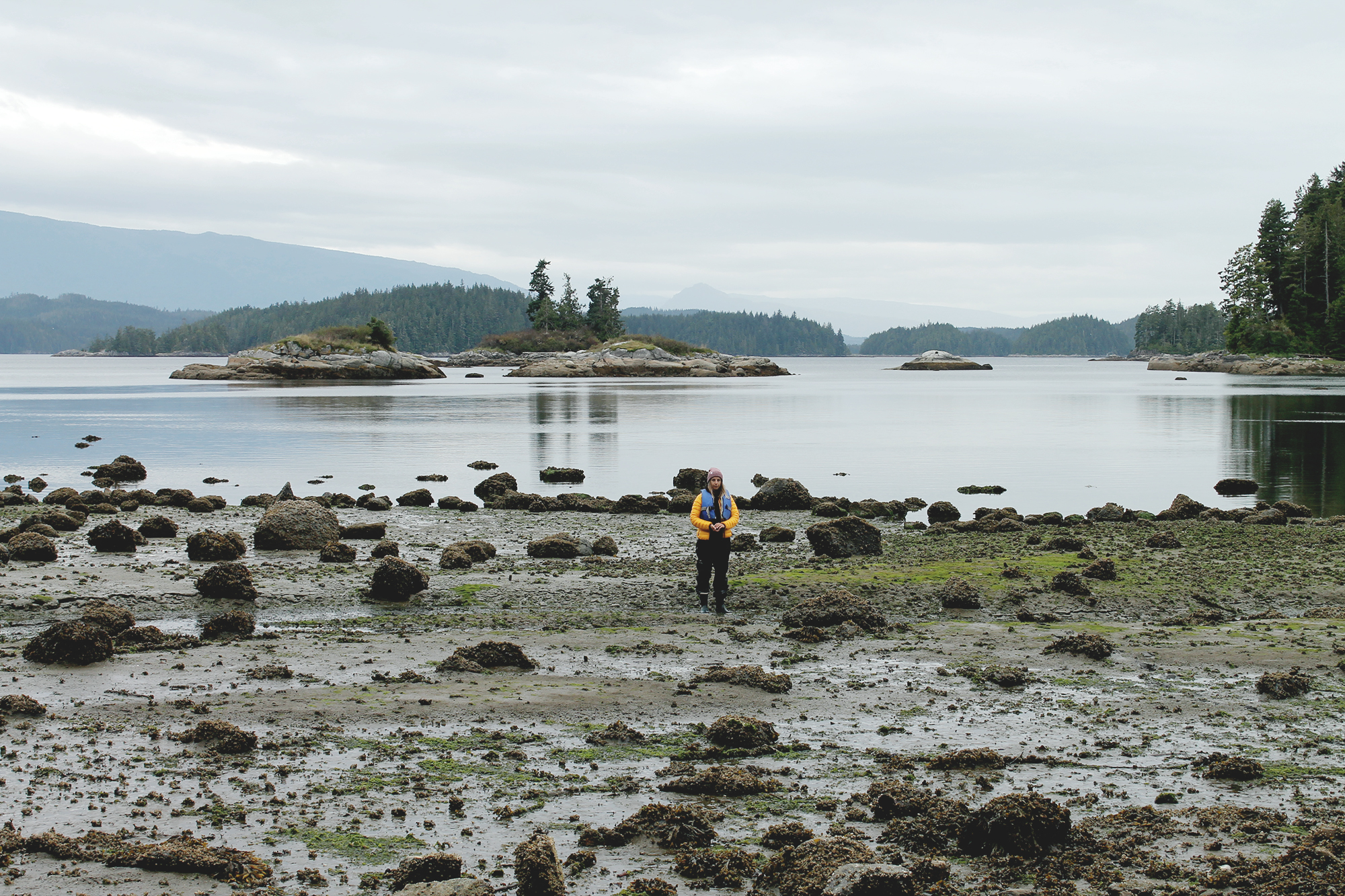 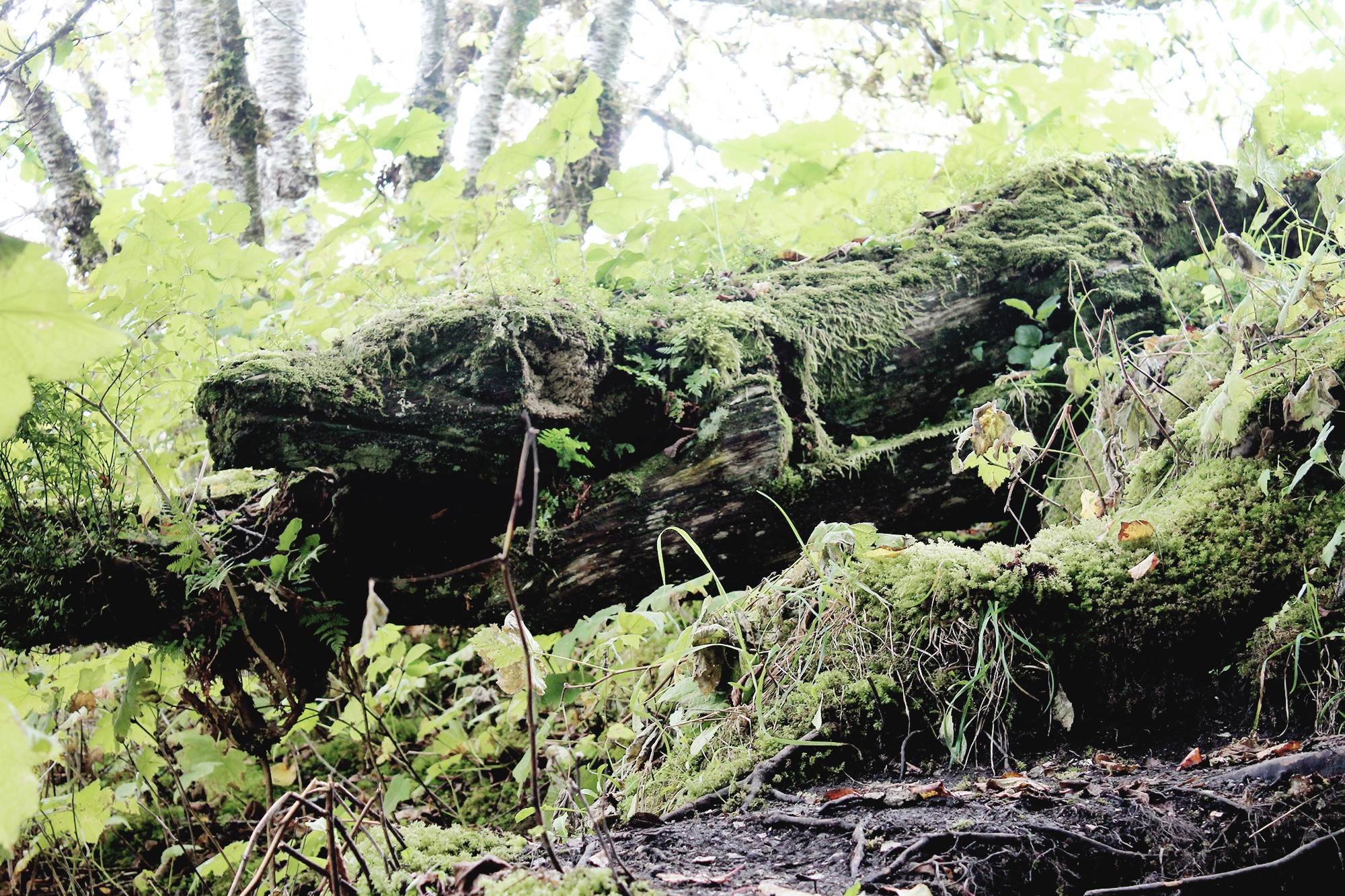 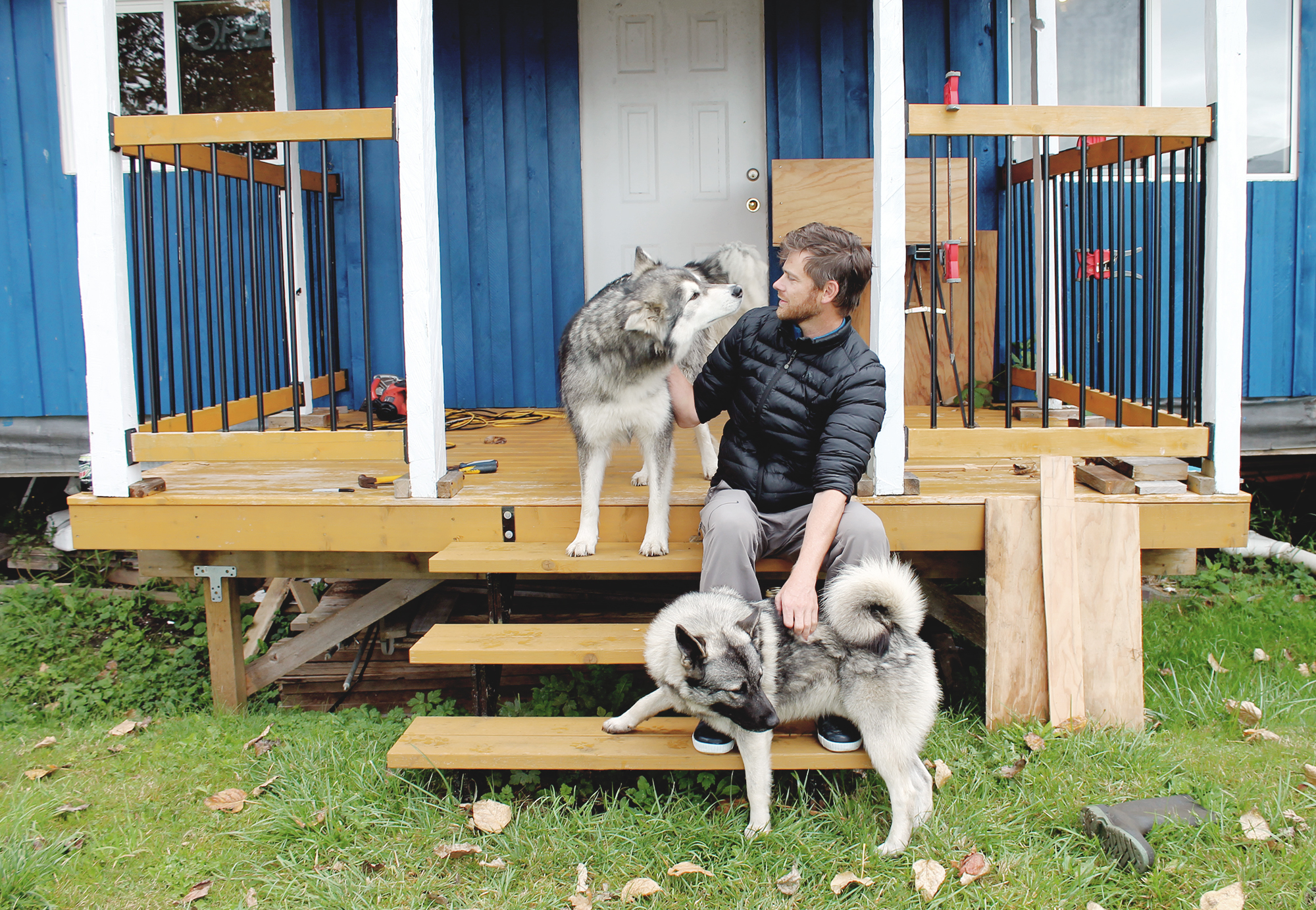 We spent the night at New Van – a First Nations community just south of Alert bay. They give tours of their Big House which was fascinating and they have some very pretty dogs. We also stopped in at Mamalilaculla – a village ghost town with totem poles being reclaimed into the sea (you can just make out in all that moss the shape of carved wood). The island is now deserted but this once was the home of the most powerful band along the coast. 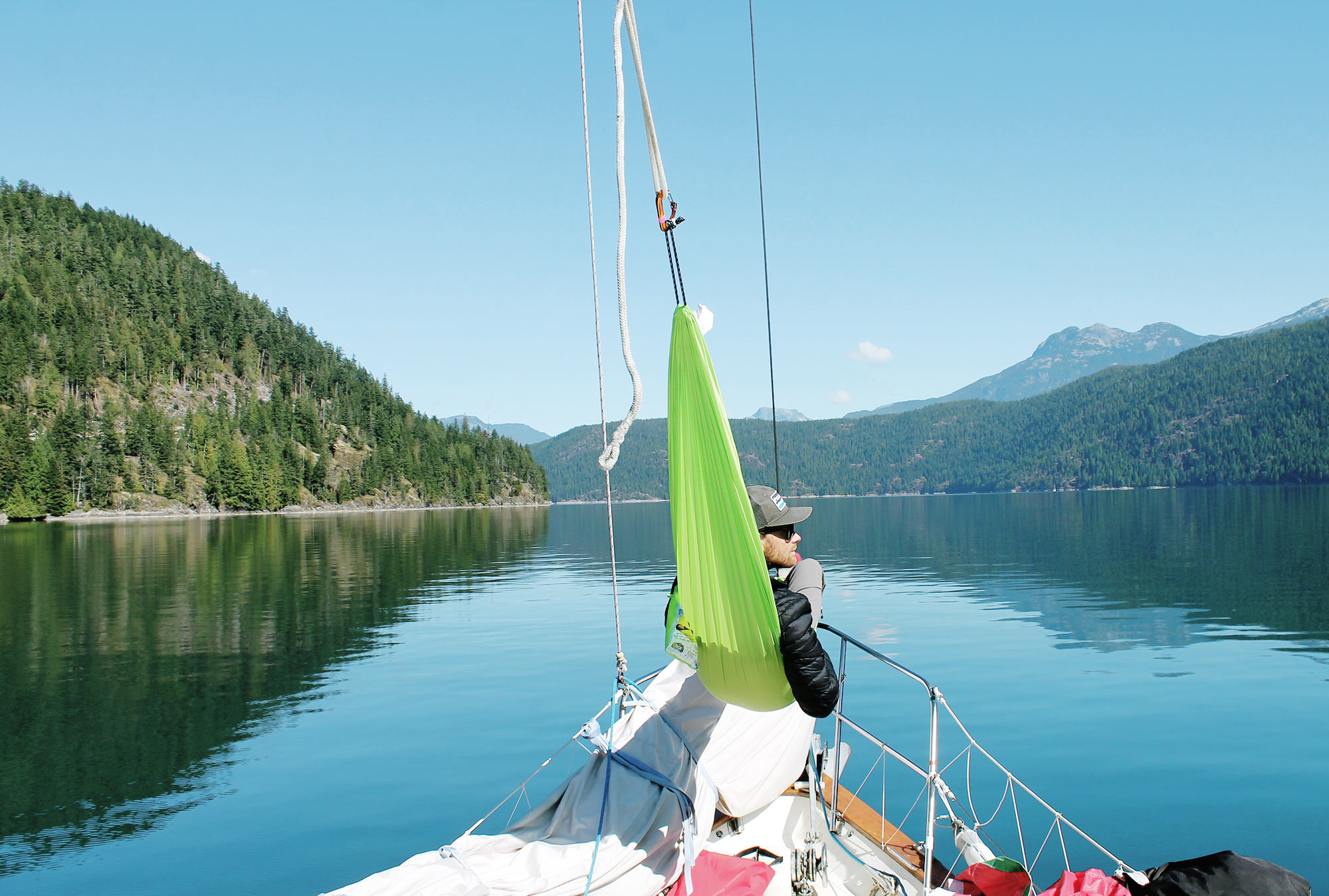 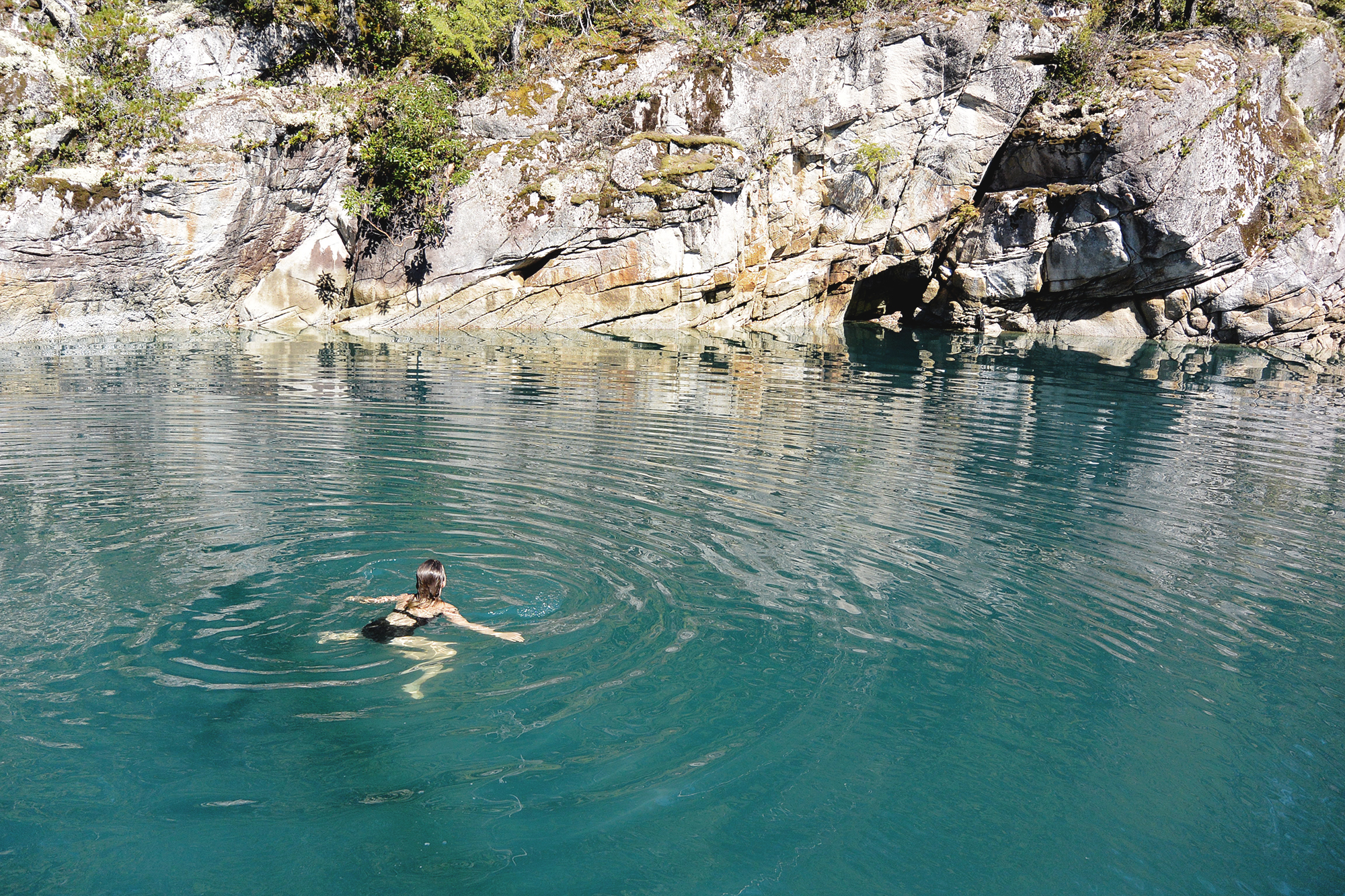 From there we headed down to Desolation Sound – one of the most popular boating areas along the coast. For very fancy geological reasons the ocean here is a bright emerald and is the warmest sea north of Mexico. In mid September we went swimming – something I can’t remember ever doing in Canada before. We spent a few days here enjoying the last whispers of summer. 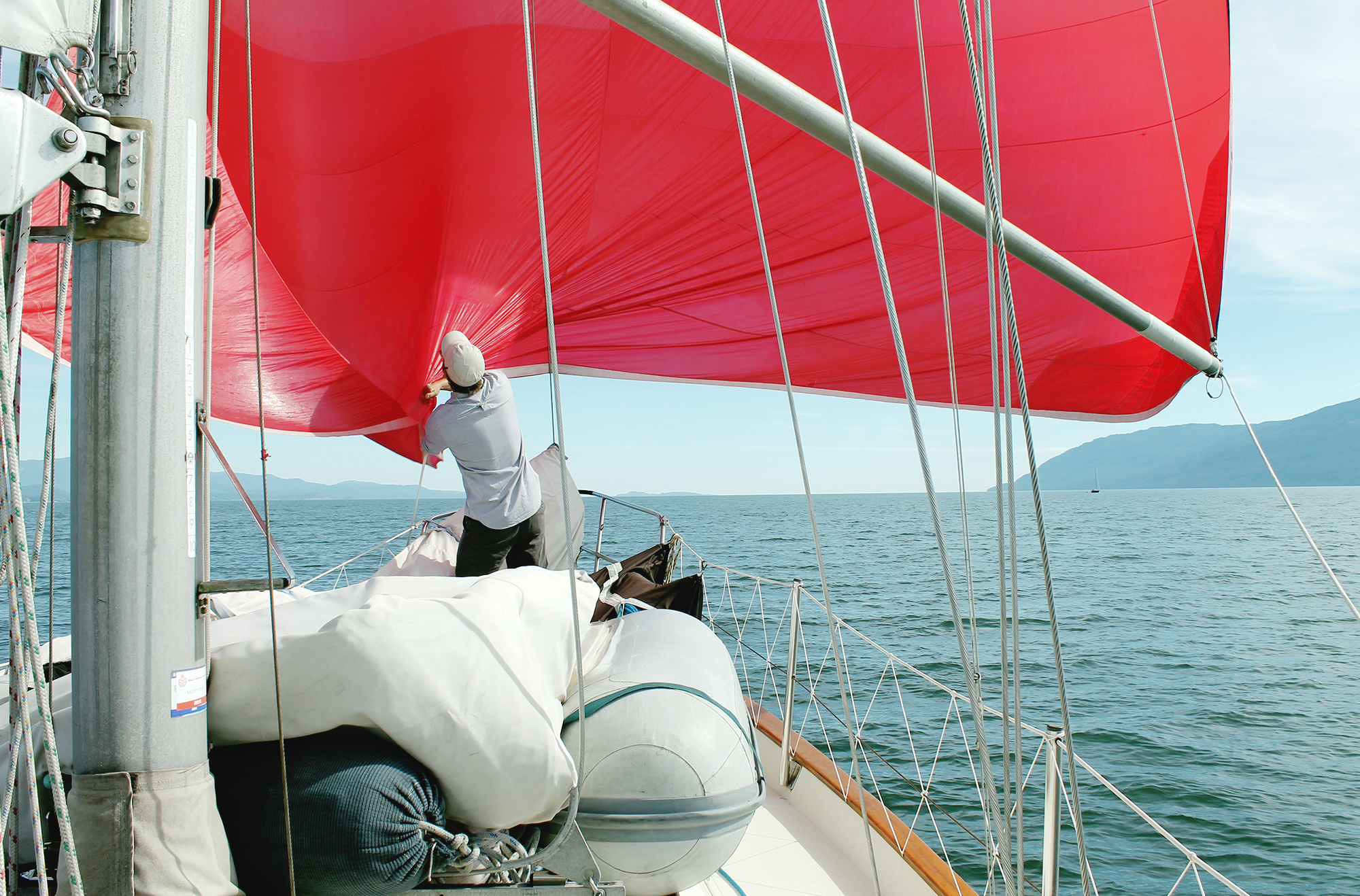 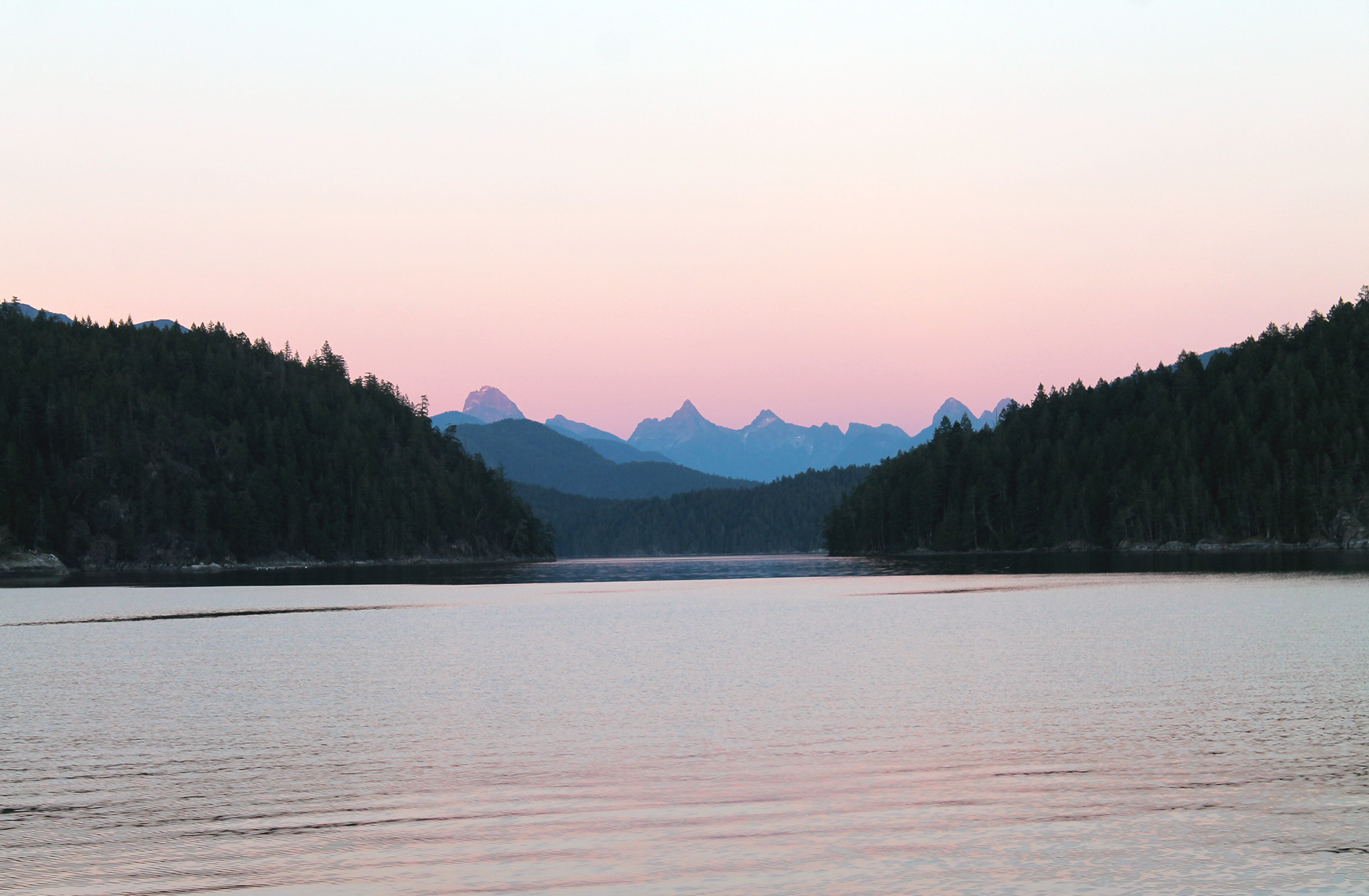 We left Refuge Cove early one morning – the mountains lit with soft rosy light – and put up the spinnaker to get home faster. 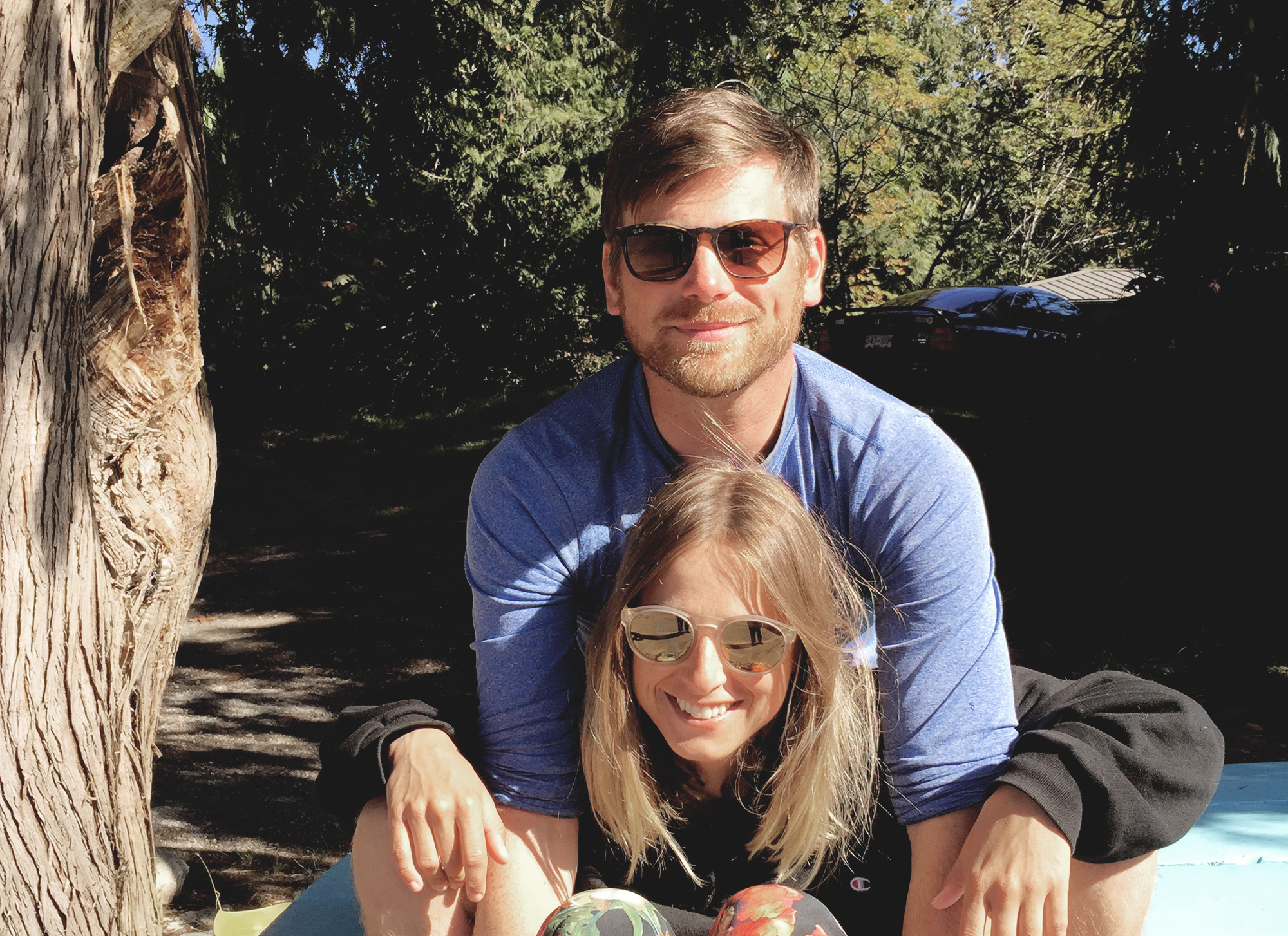 We clean up real nice. For weeks at a time we had no access to showers and the first few days back into the world of normal hygiene felt unbelievably luxurious. 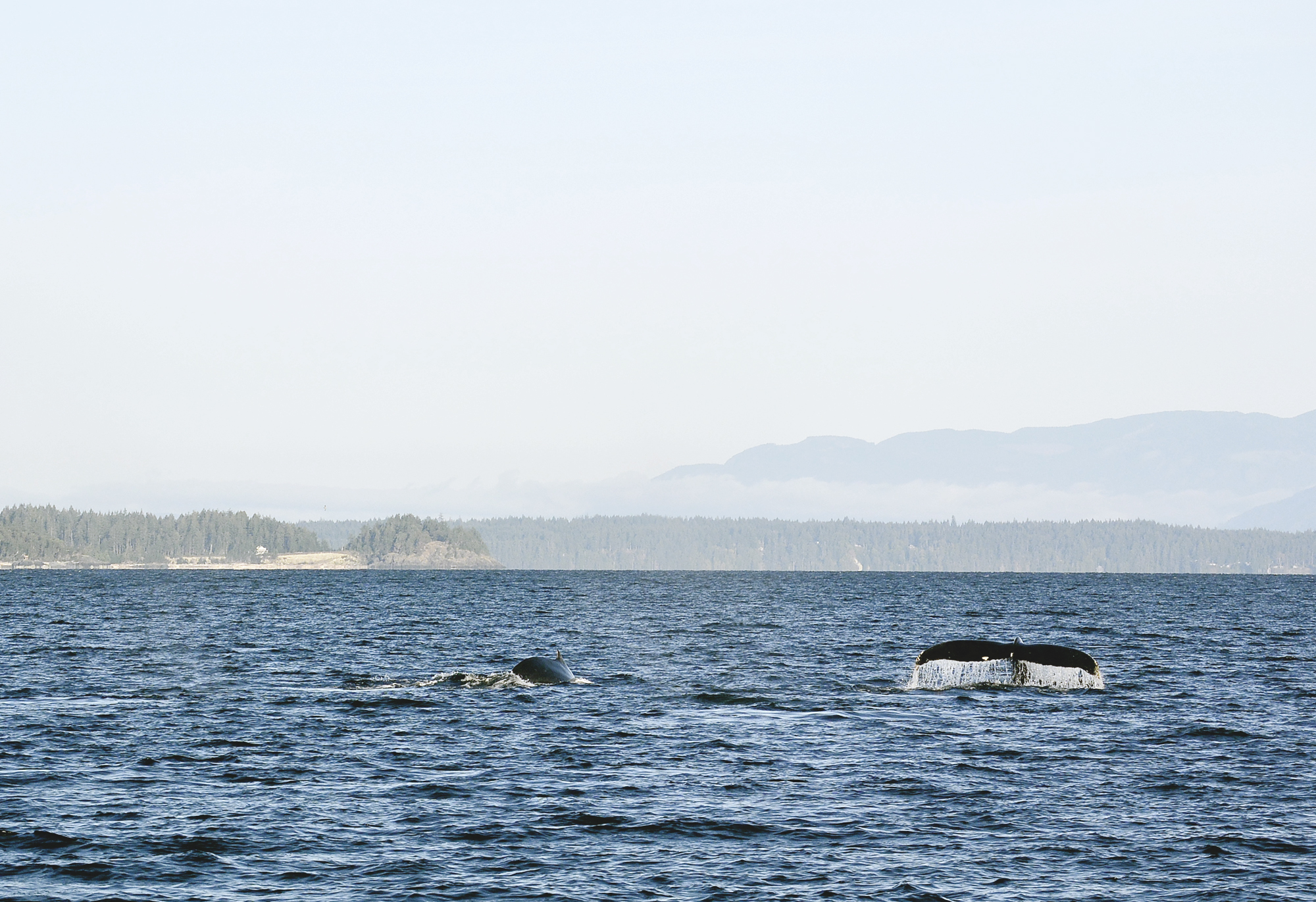 Goodbye sailing trip! Thanks for following along – we’ll be back to regular programming from here on out…

One response to “SAILING : WEEK FIVE”