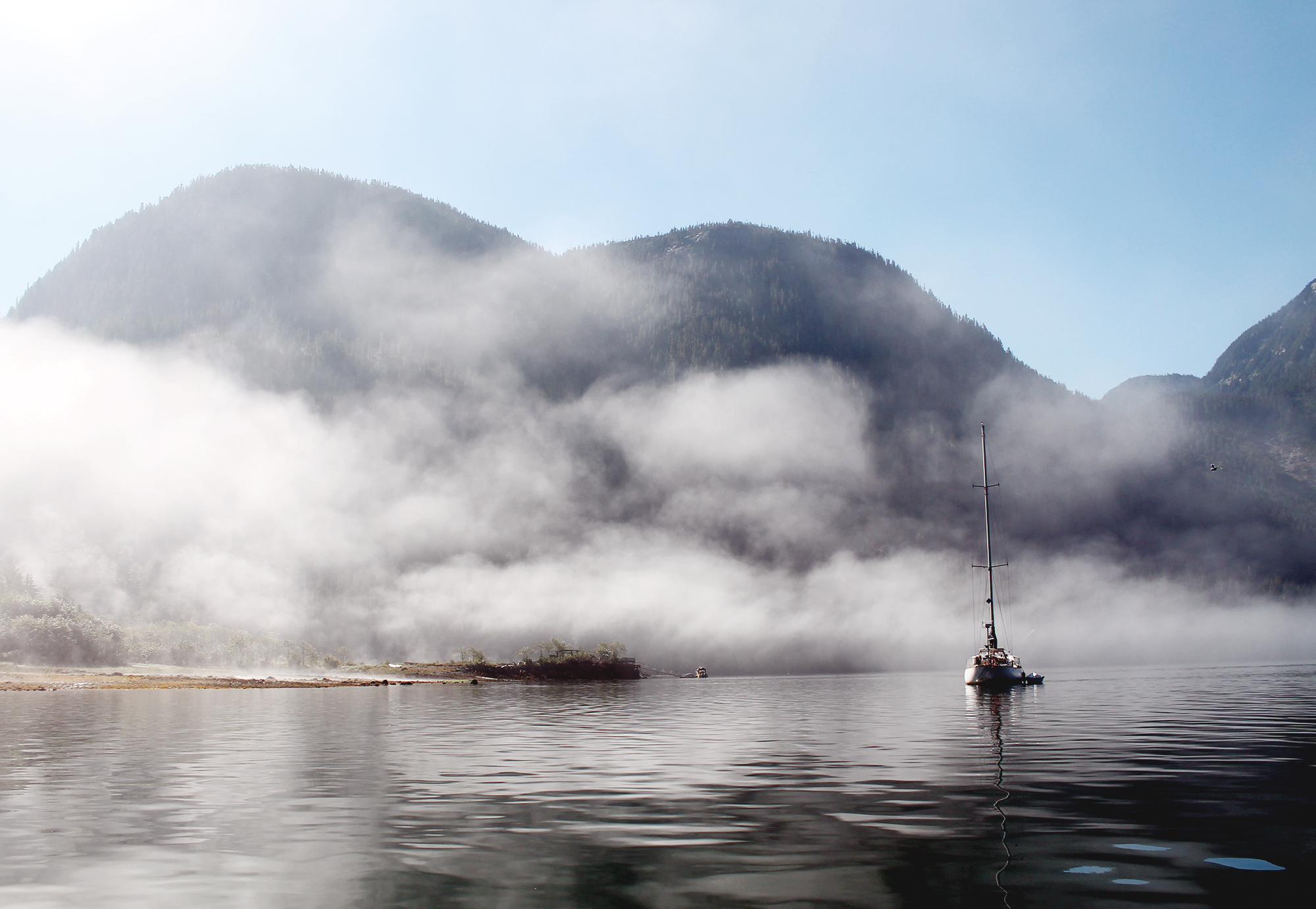 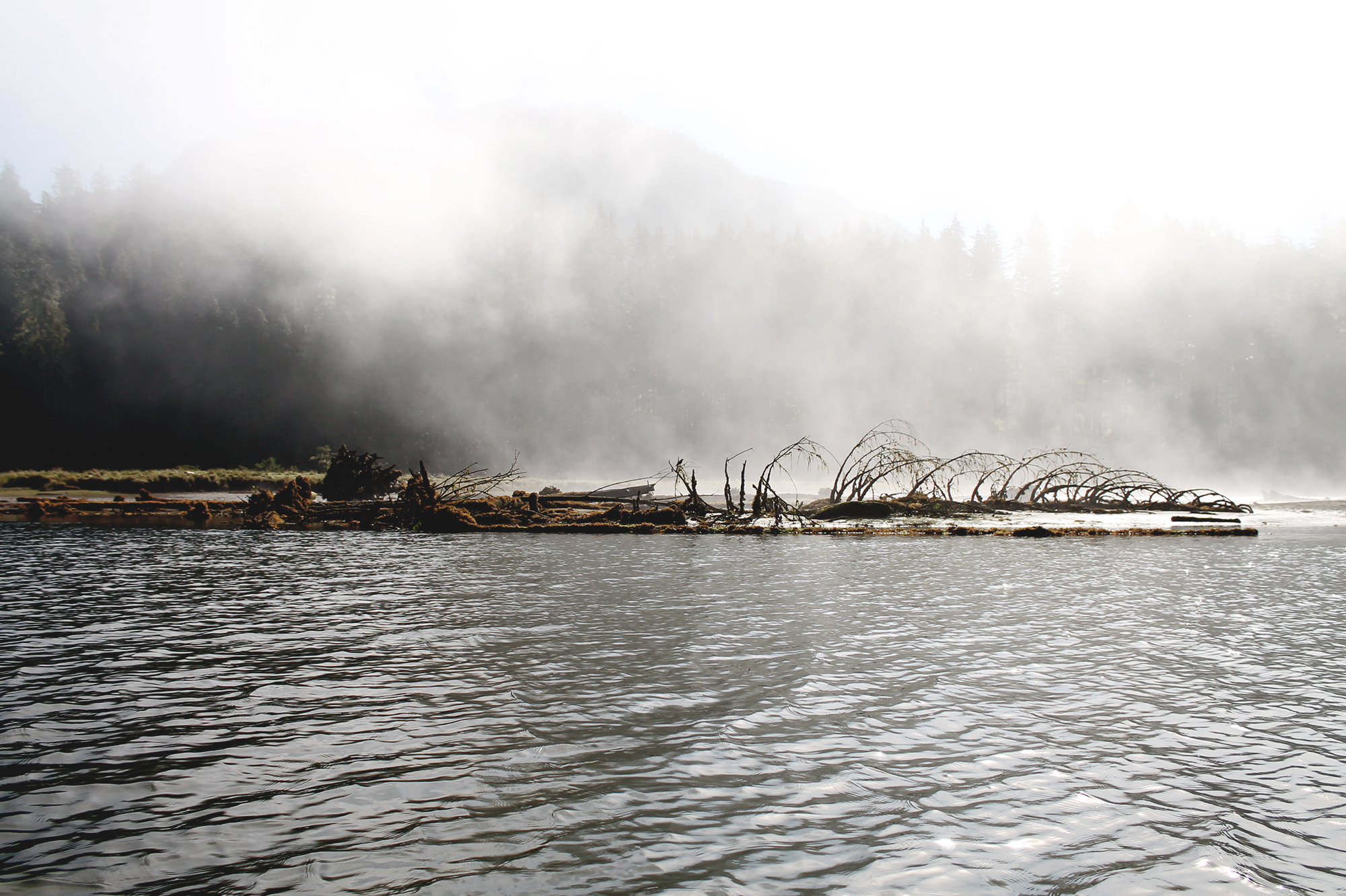 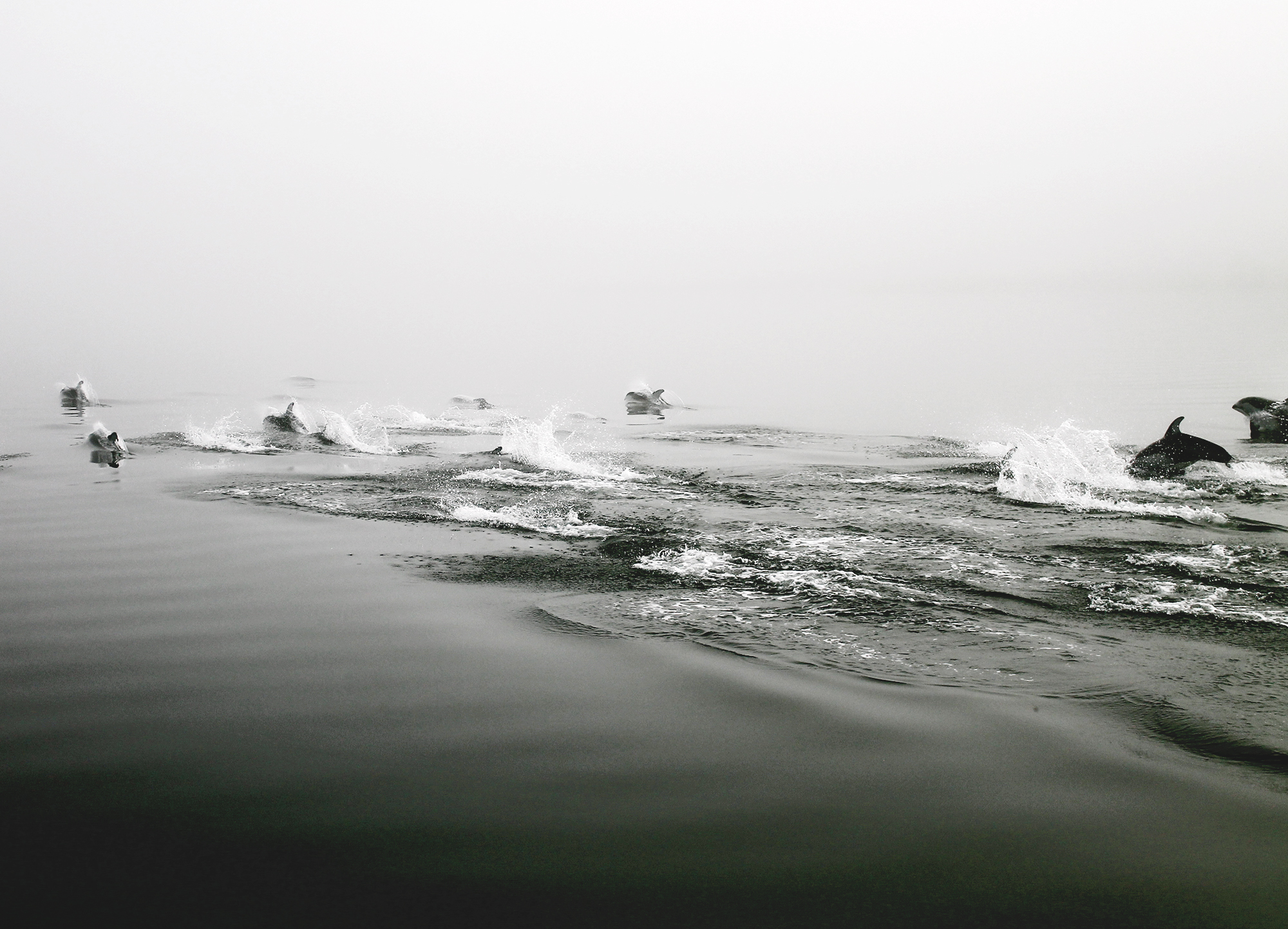 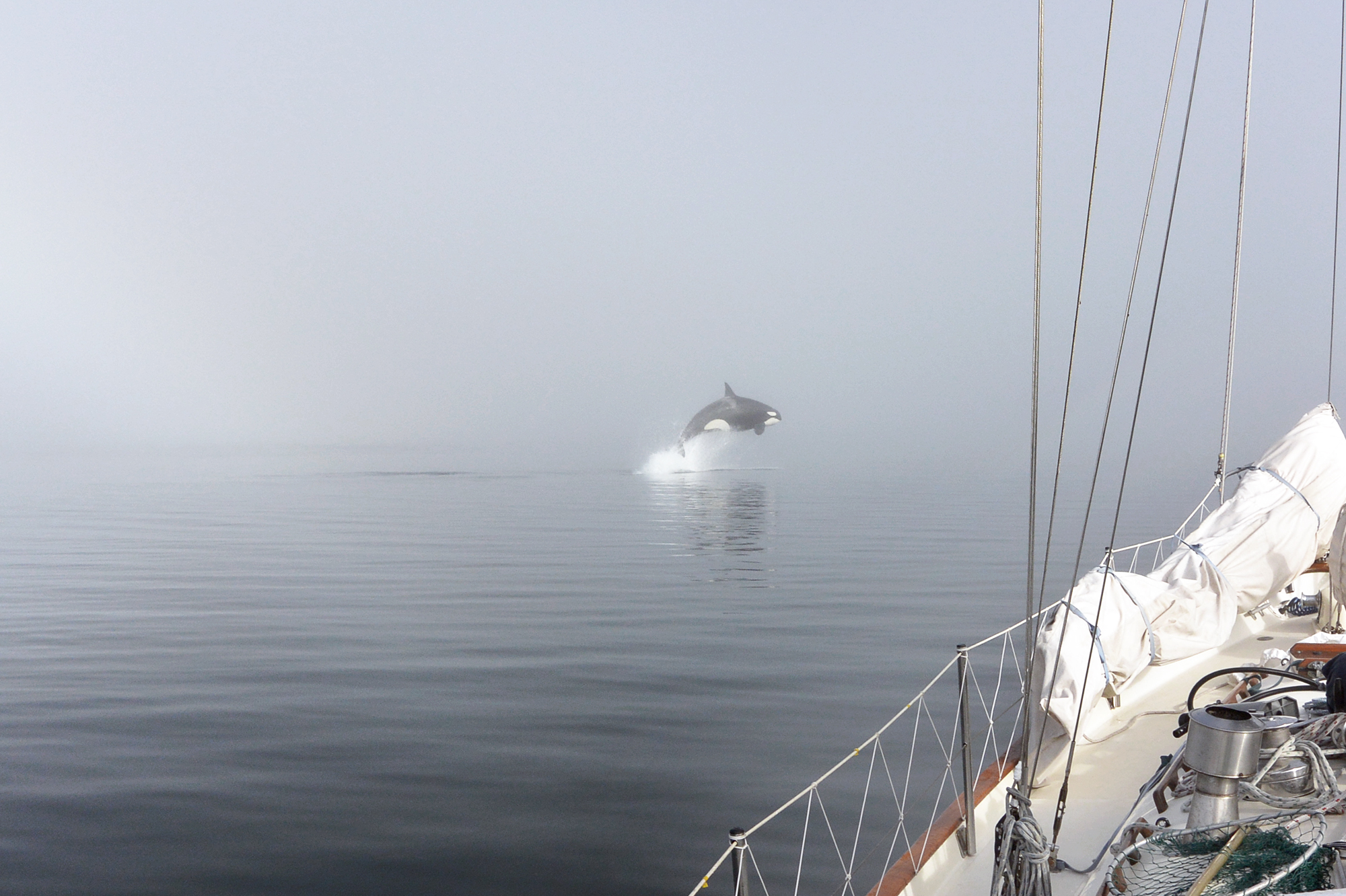 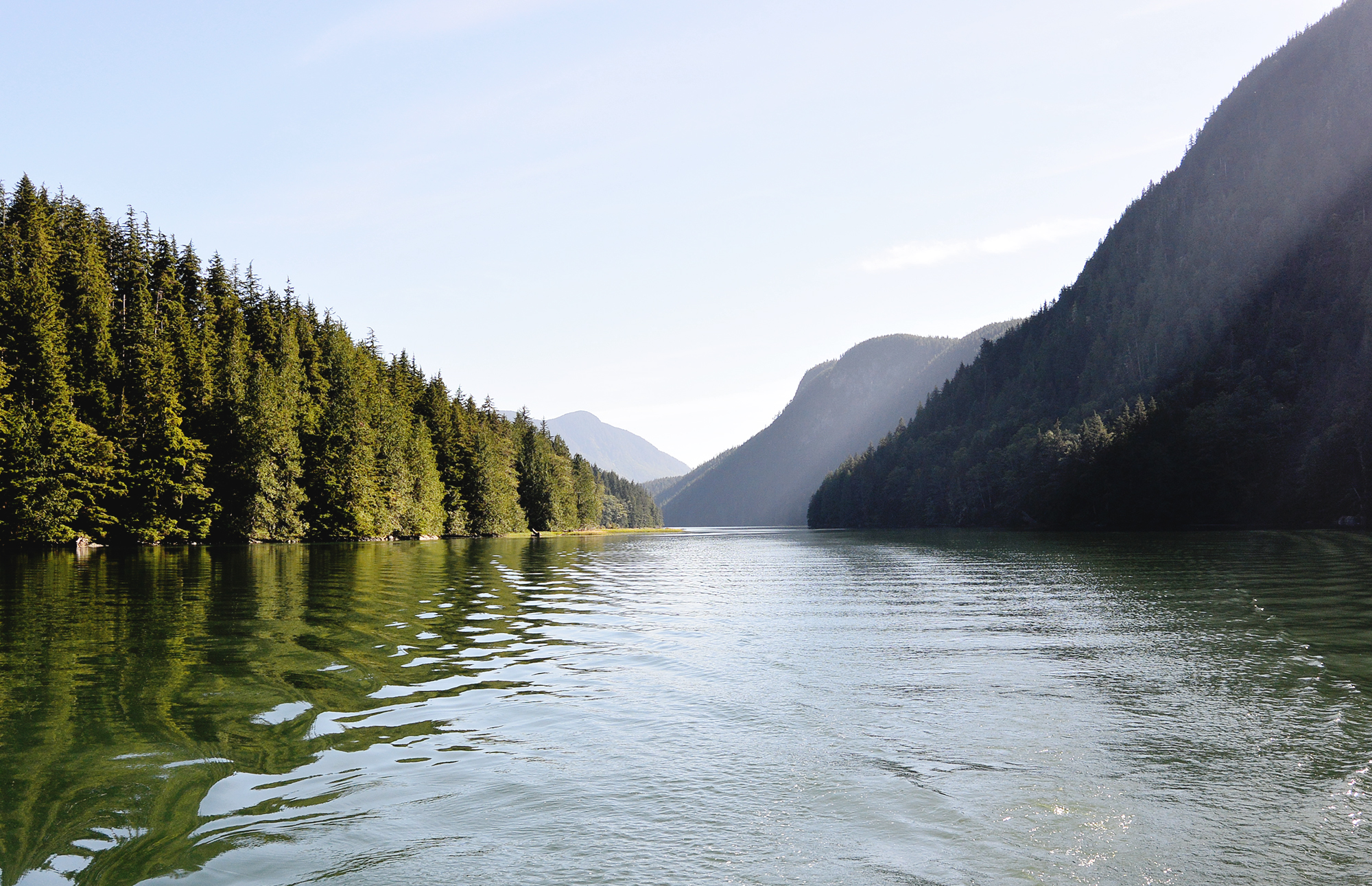 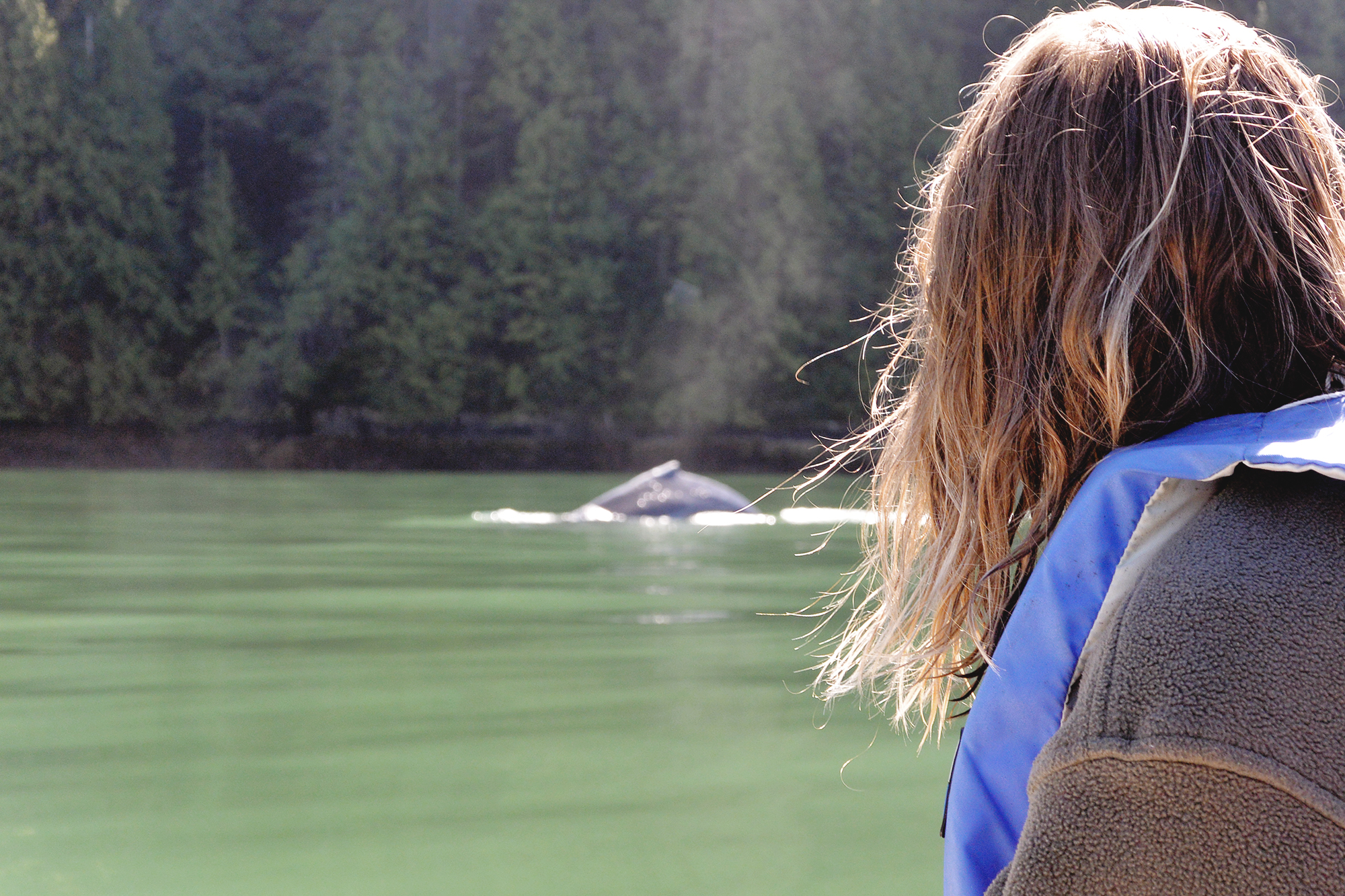 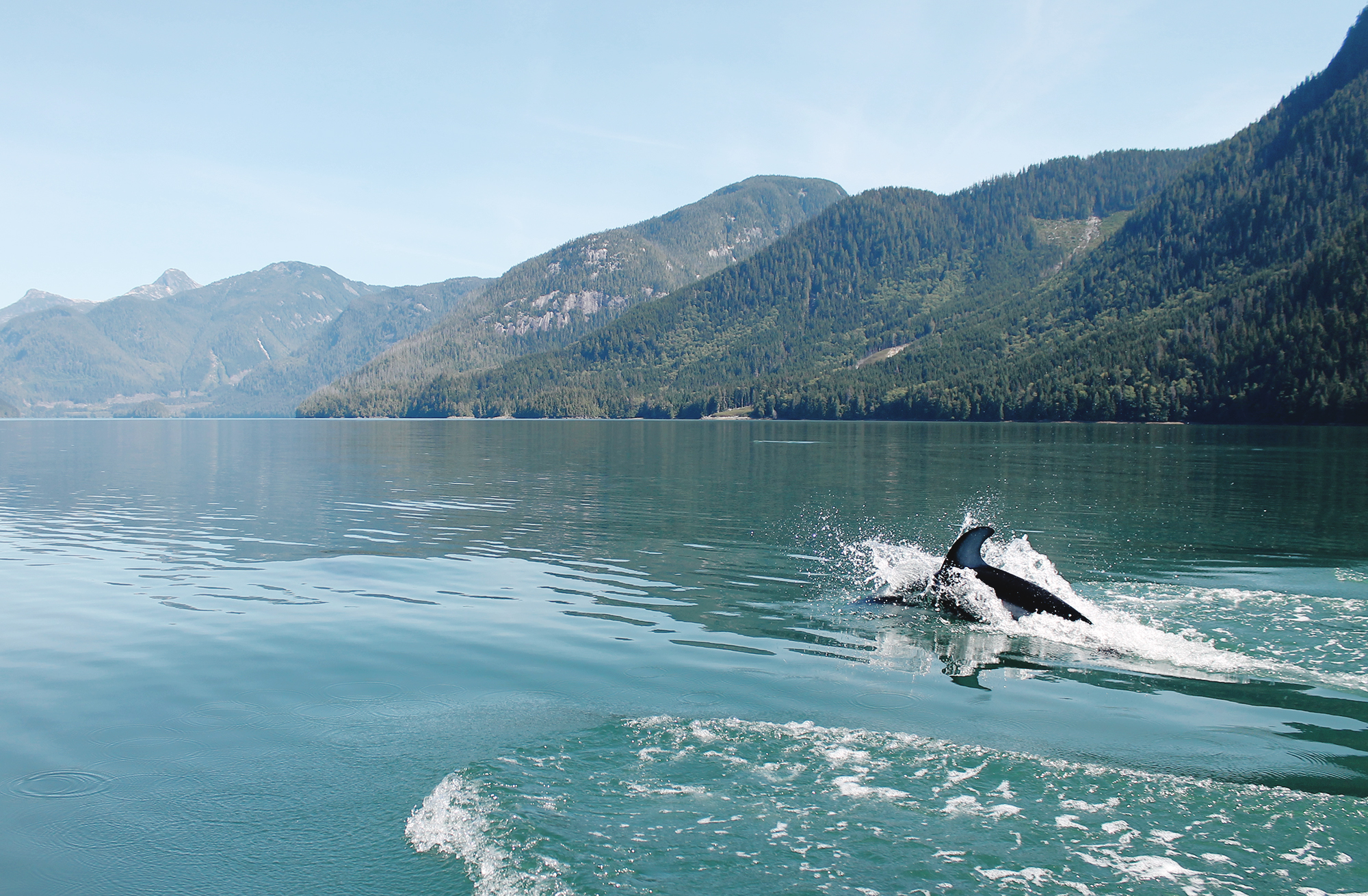 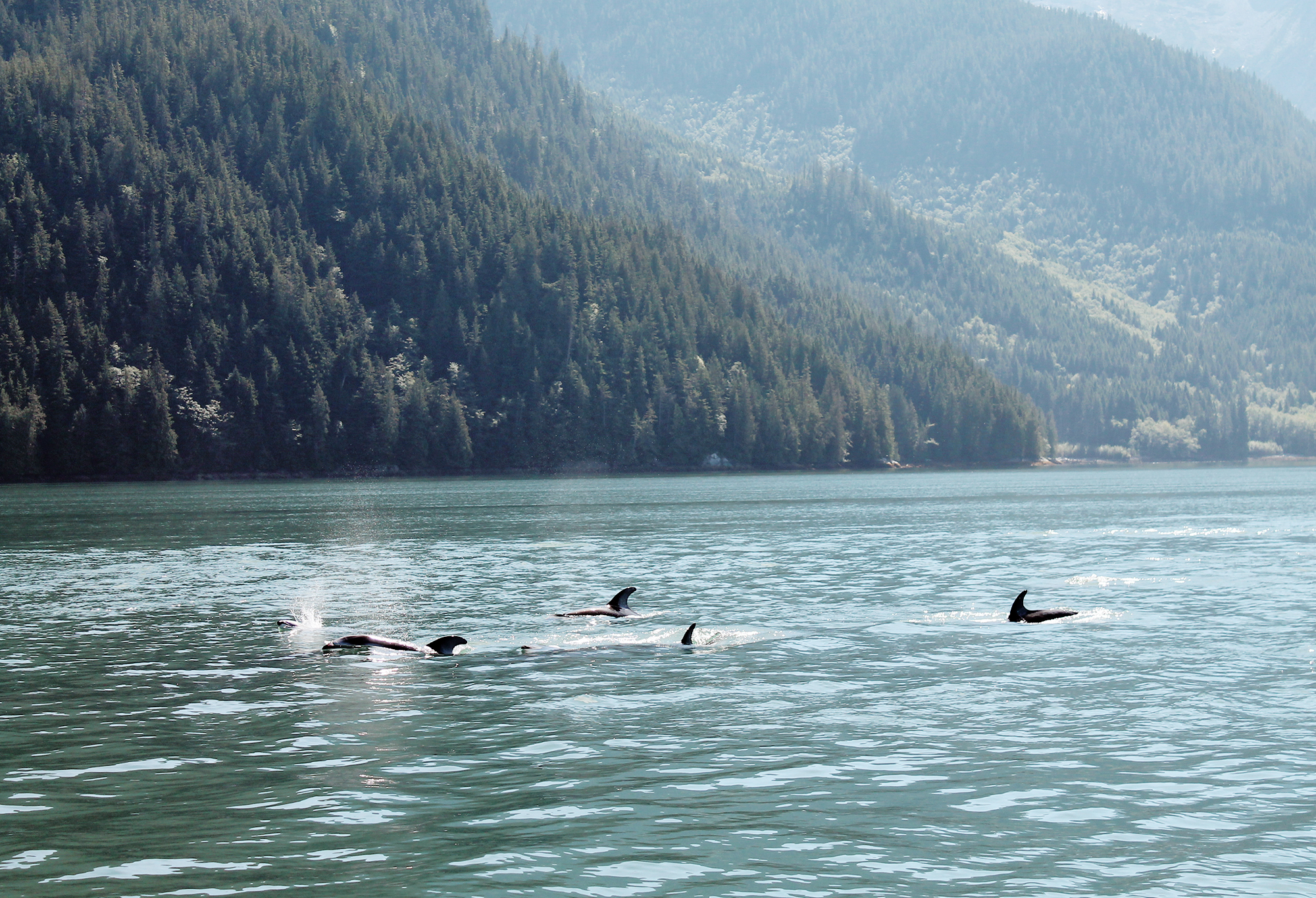 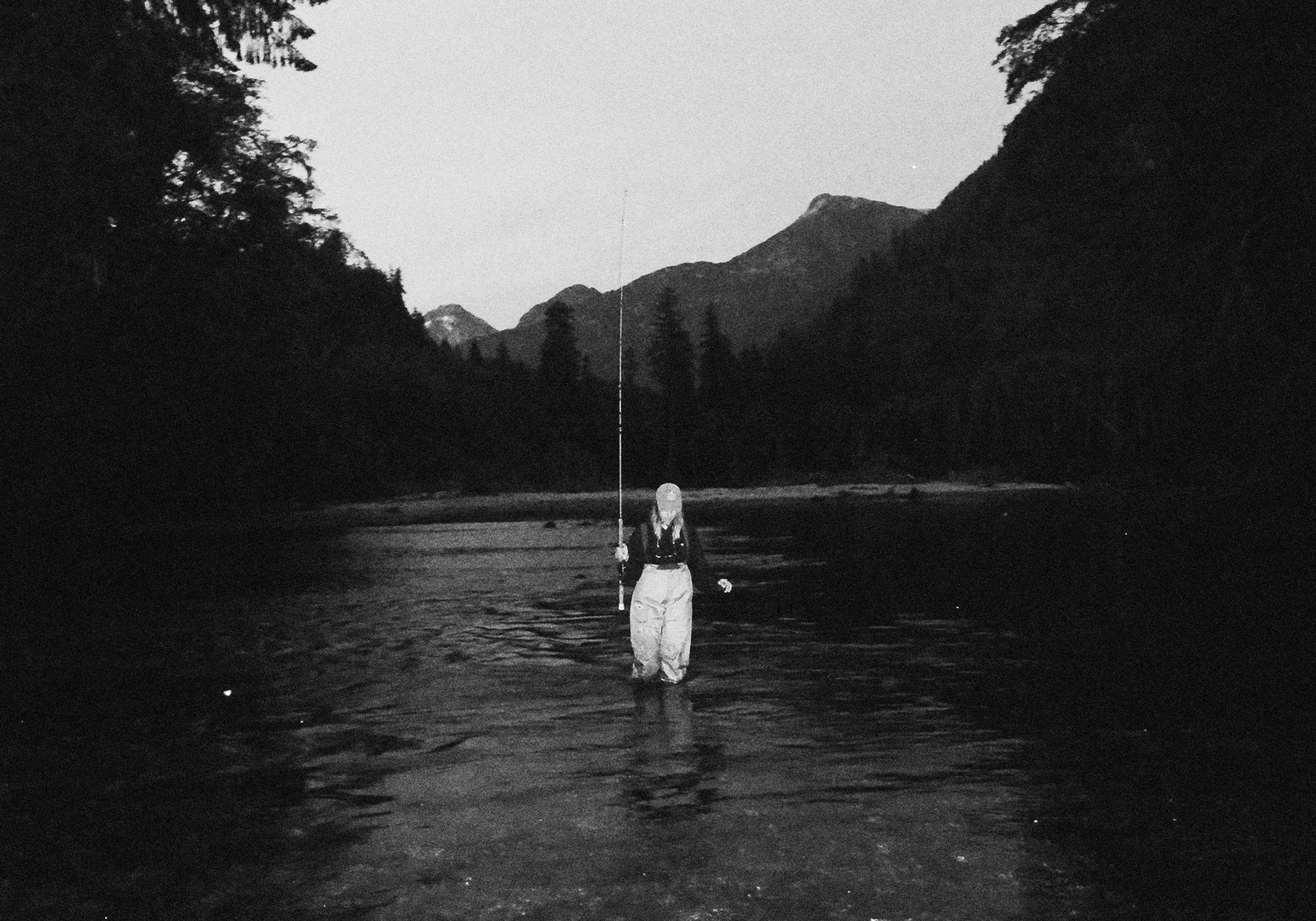 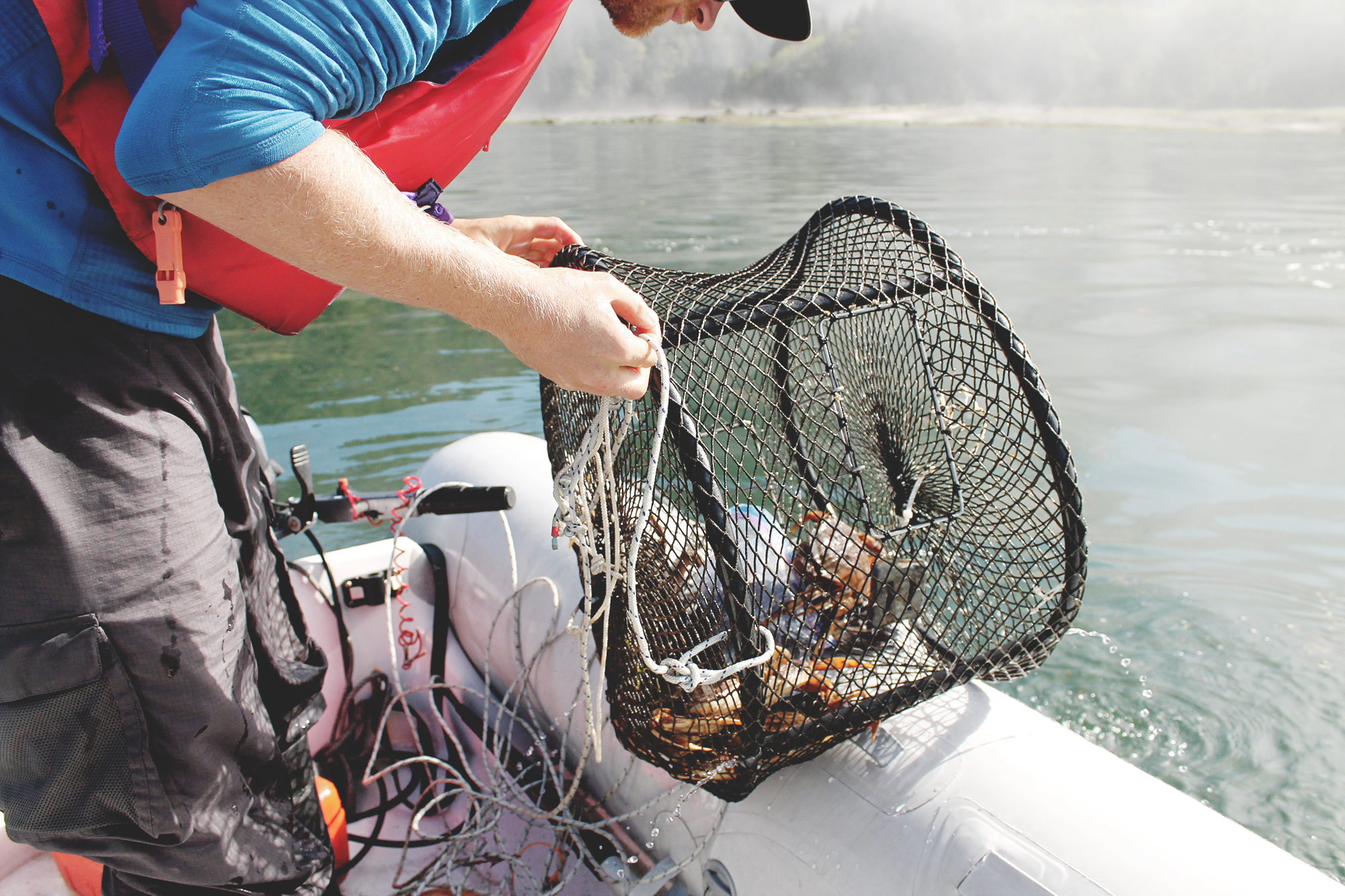 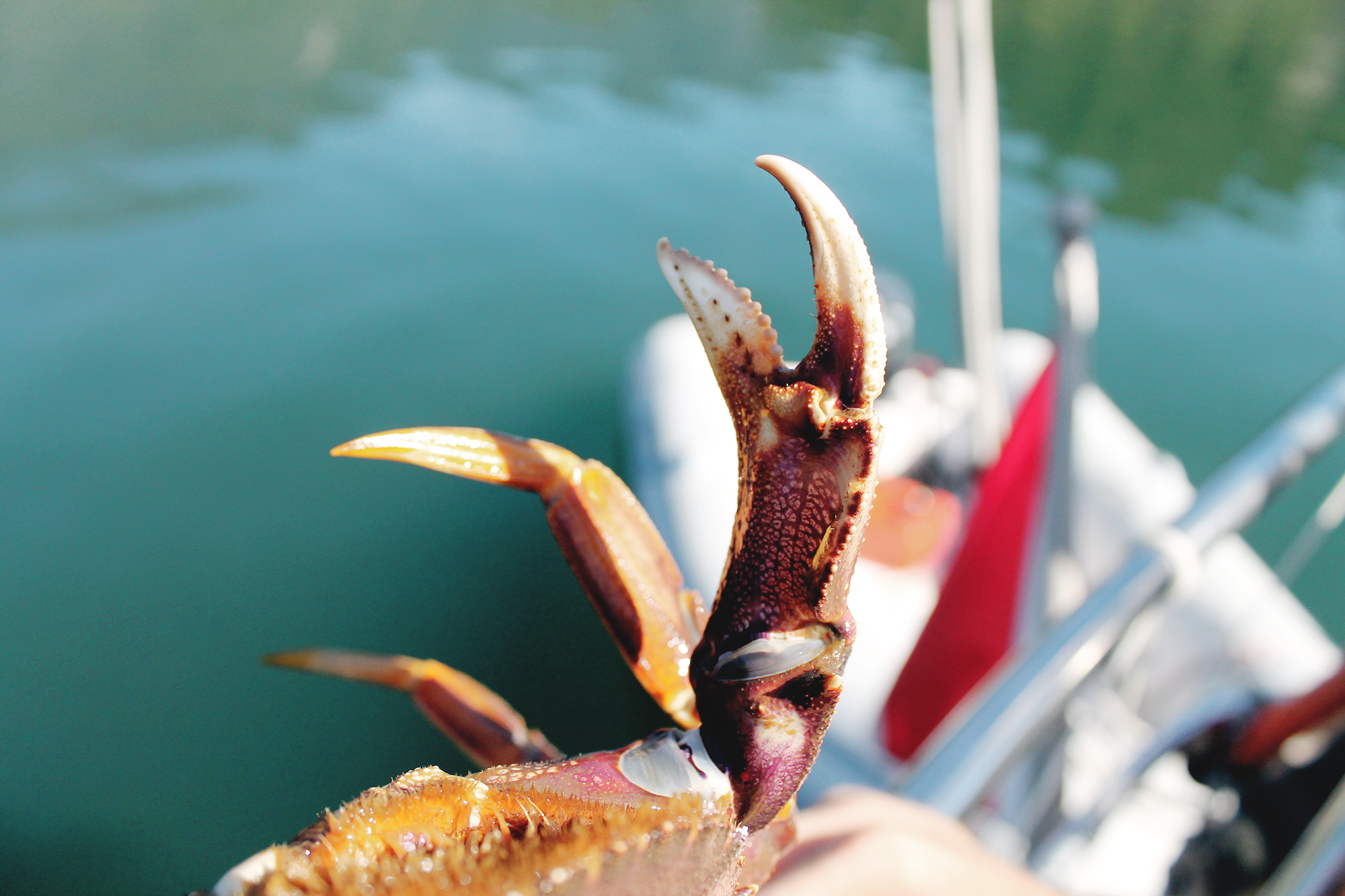 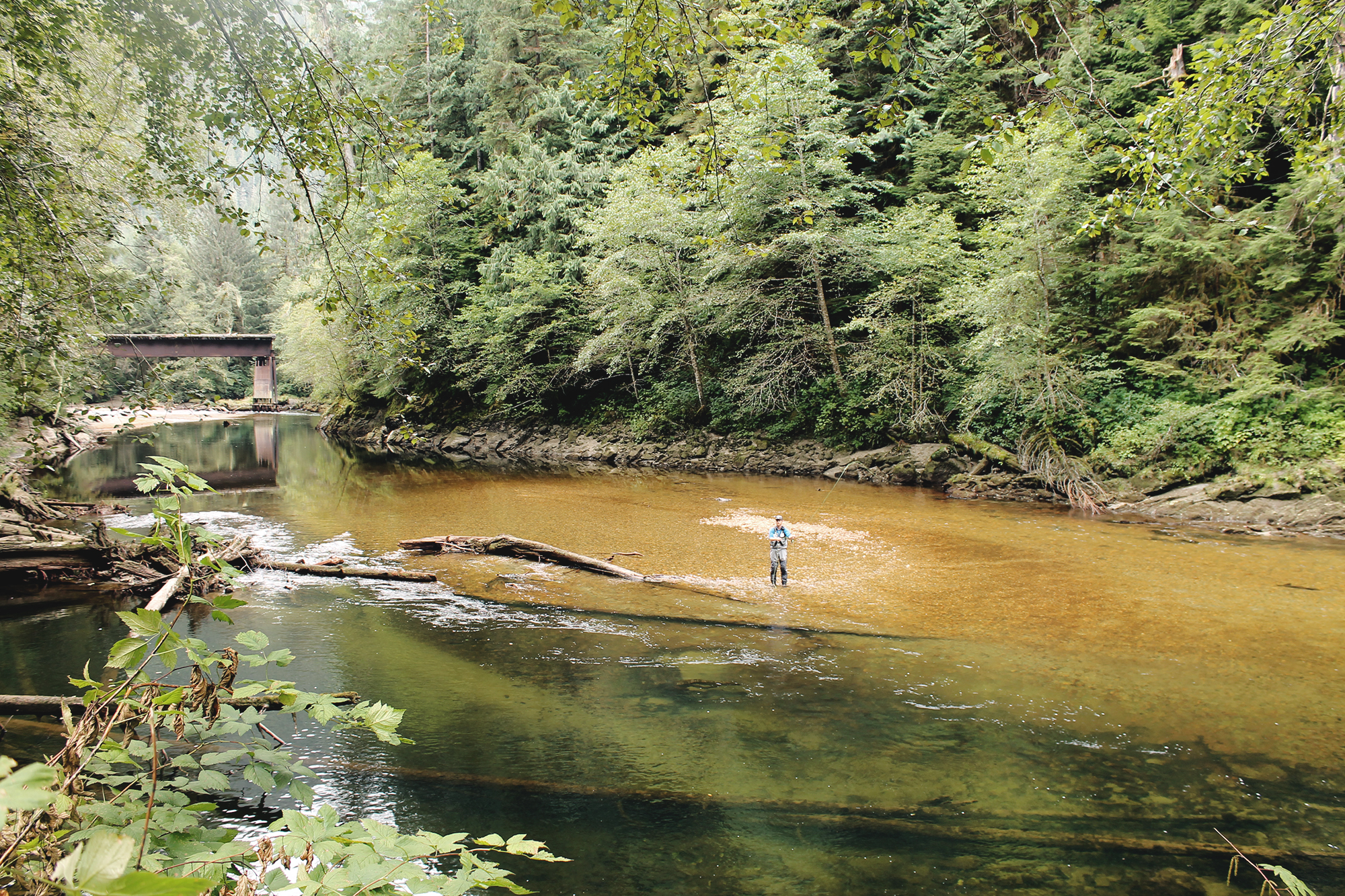 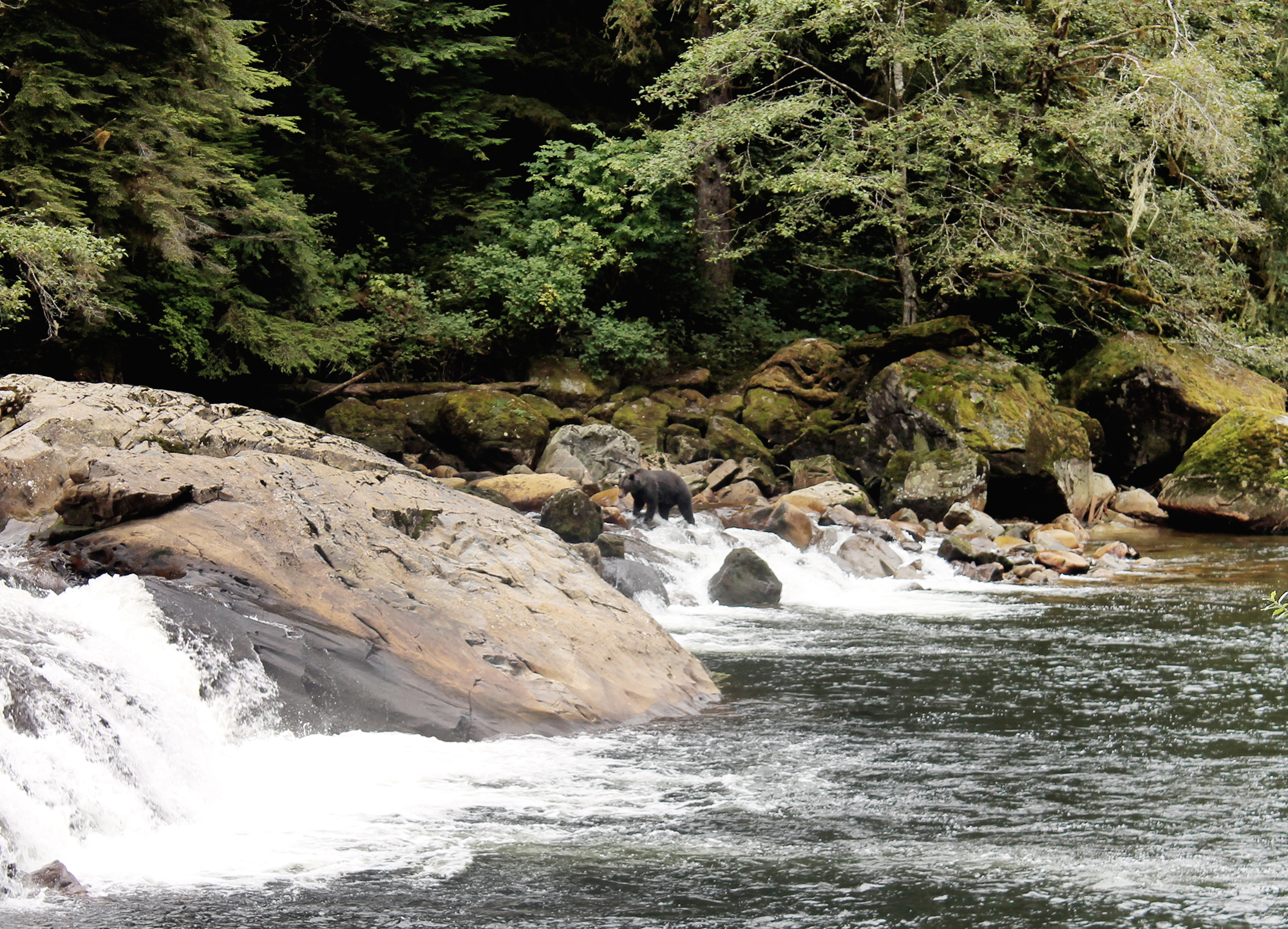 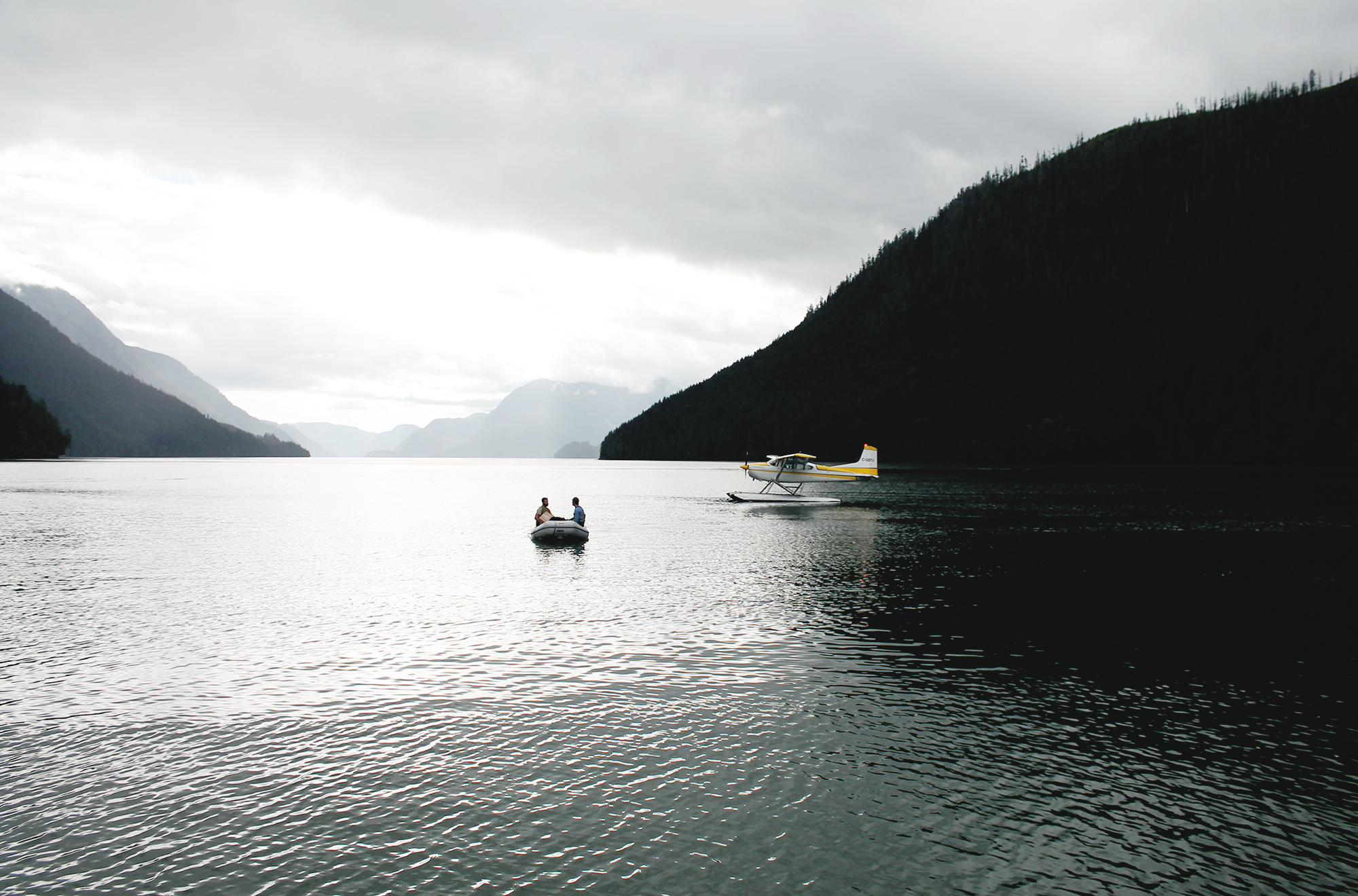 We have found Jurassic Park. We arrived in Thompson Sound, an unassuming inlet, late one night. I casually mentioned I wanted to see more wildlife and as an almost immediate answer heard the puff of a whale coming up for air before it’s long dive below the ocean surface for more food. I grabbed my binoculars and in the far distance was able to see several humpbacks surface – foreshadowing of days to come.

When we woke up the next morning we were completely enclosed in a fog bank, essentially blind to the natural world around us. Kevin was on deck trying to figure out if our anchor had moved during the night when he heard manic splashing. He called me up in time to have a pod of pacific white sided dolphins explode out of the fog and hurtle themselves 10 feet beside our boat heading full speed for the river behind us. We stood there with our mouths on the ground. Just as we were recovering more splashing was heard in the distance and four Orcas in hot pursuit of the dolphins blew by our boat stopping to jump fully out of the water a mere 20 feet from us for good measure. At one point an Orca jumped completely out of the water underneath a rainbow beside our boat. ARE YOU KIDDING ME?!?!?!

The day continued to unfold with the wildlife meter on high and we started to think that maybe we wanted to spend a bit more time getting to know Thompson Sound – we ended up staying a full week. Every morning we would wake up to a wall of white cloud which burned off in the August sun leading to hot, lazy afternoons and long evenings. We made friends with the couple on the boat anchored next to us and met the local fur trapper/bear-watching guide (Trapper Rick) and his young British university student photographer/intern Felix who lived on a dock beside the creek.

It turned out the salmon had arrived – every year they return to the river they were born in to spawn and they are a massive food source for almost all of the local animals. When they arrive so does the surrounding animal kingdom and for our time there there were so many creatures in the area us we stopped even noticing the whales, dolphins, seals, seal lions (seriously two sea lions came up beside our boat and kissed each other and we were like, ‘phhhhhhffffff…whateves…’), eagles (we started calling them seagulls because there were so many bald eagles around they were no longer special to us), and bears. The one creature noticeably absent – humans. It was truly paradise and one of the most, if not the most, special time of the trip.

1/2_ Morning fog in Thompson Sound. The fallen trees in the river stick out of the water looking like fallen dinosaur bones adding to the Jurassic Park effect.

3/4_ Pod of dolphins hurtling by and the only photo we managed to snap of one of the Orcas. This does not capture how close and intense this experience was.

5_ The inlet once the fog had lifted.

6_ Watching one of the many humpback whales feeding along the shoreline from our dinghy.

7/8_ A pod of dolphins spent 45 minutes playing with us in the wake of our small powerboat.

9_ Fishing in the river as night falls. The river was full of bears also fishing so we were constantly singing ridiculous songs at the top of our lungs so they would know where we were. This did not stop me from being freaked out but it did add to the adventure. This was also my first time in waders – it is a very cool feeling to walk through water and remain dry…

10/11_ Crab and prawn traps were set. All of our crabs were undersized but we did pull up 24 of the largest prawns Kevin has ever caught which we brought over to our neighbours boat to contribute to dinner that night. I photographed every creature we could get our hands on so I can paint them when I get home.

12_ Kevin is an avid fly fisherman so this was paradise for him. He claims to have never been to a better river.

13_ One of many bear sightings. After the first few I got used to the idea that they were around and it was very clear they had no issue with us being there too. As long as we didn’t surprise them they were far more focused on the salmon than on us.

14_ Kevin’s friend Phil arrived by float plane at the end of the week to spend some time with us on the boat. Like any good guest he came bearing gifts of fresh food, scotch and news from home.

One response to “SAILING : WEEK THREE”